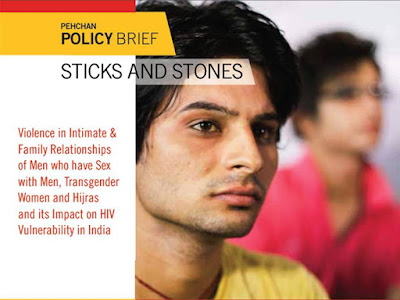 What if the violence is between two males in an intimate relationship, or between a Hijra and her male lover? What if the family violence is directed at a son who would rather be a daughter? Or how do you help trans women who face relentless physical and emotional abuse at home because of their gender non-conformity, and then face it also from male intimate partners to whom they turn to for solace and love? Equally importantly, why does such violence happen, what is its impact and how can it be reduced, if not eliminated?


Any time is a good time to start talking about violence hitherto unheard of, ignored or hushed up, especially if it has the potential to impact the health and future of entire communities, and by extension society at large. Moreover, no violence can be brushed under the carpet by society just because it relates to marginalized sections. All violence has roots in how larger society is structured and the responsibility to talk about it and deal with it is a shared one.

Earlier this year, India HIV/AIDS Alliance, New Delhi,  a non-government organization (NGO) working on HIV and other public health concerns, broke the silence so to speak, and published a document titled Pehchan Policy Brief: Violence in Intimate and Family Relationships among Men who have Sex with Men, Transgender Women and Hijras and its Impact on HIV Vulnerability in India – the title a tad misleading, since the impact of violence is not just on HIV vulnerability but also the overall well-being of the victims, and though this document was targeted primarily at India’s national HIV programme, its findings and recommendations are applicable also to other health and development programmes for the communities concerned. 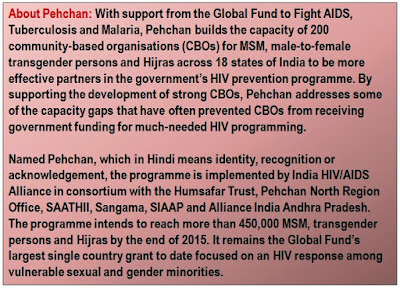 
Background: Violence against men who have sex with men (MSM), transgender and Hijra individuals as a rights concern and as a driver of the HIV epidemic is an understudied topic in India. The Pehchan programme, a Global Fund supported HIV programme that strengthens MSM, transgender and Hijra community systems, is one of the first initiatives in the country to take up violence and trauma faced by these populations in a large scale intervention. The service provision, advocacy and research experience of Pehchan across 18 states and 200 community based organisations (CBOs) clearly shows that sexual orientation, gender identity and sexual behavior-based social and legal stigma induces strong discrimination and severe forms of violence against all sections of MSM, transgender and Hijra communities. 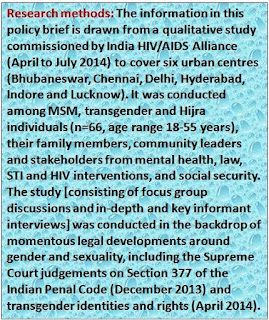 Notably, with support from Pehchan, MSM, transgender and Hijra CBOs and HIV interventions led by them have undertaken advocacy with the police and health care providers to create an improved enabling environment. However, intimate partners and families (both traditional and non-normative) have not received the same attention. Global evidence indicates that such violence often is co-prevalent with traumatic life events, internalized stigma, depression, and increased risk behaviours for sexually transmitted infections (STIs) and HIV acquisition among MSM and transgender populations. There has been a significant gap in our understanding in India of the violence committed by intimate partners and family members – violence from close and trusted sources that has far reaching impact on the mental and physical health of its victims. 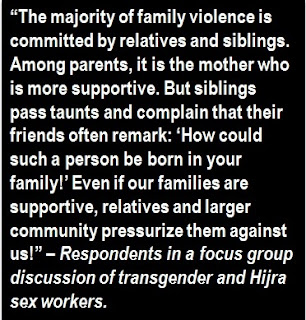 Forms of family violence: The perpetrators of family violence include not just parents, but also siblings and other relatives in the extended family. Beatings, heckling, verbal abuse, communication breakdown, forced confinement, denial of food, isolation from family functions, compulsory marriage, eviction from home and property denial are accompanied with emotional neglect and blackmail, including parents threatening to commit suicide. Sexual violence in the form of child sexual abuse (incest) is part of family violence, an issue neglected by civil society and government alike. Eviction from home is a reality in Hijra families as well, which also has a patriarchal control structure and individuals who lose favour of the guru often lose their place in the Hijra family. Financial exploitation is also common to both traditional and Hijra family settings.

Reasons for violence: Hetero-patriarchal domination of anyone “not male and heterosexual” results in several interrelated reasons of violence like prejudice, ignorance, phobia, stigma (including self-stigma), rigid family expectations for children based on gender assigned at birth, gender-based inequality in intimate relationships, and stigma around HIV. Another important trigger for family violence is MSM and transgender people dropping out of educational institutions when they do not find protection against stigma and bullying from teachers and students. Systemic gaps like the absence of strong legal deterrents, either in terms of unbiased and supportive laws or sensitive policing systems, perpetuate both intimate partner and family violence.

Impact of violence: The most typical pathway of impact for intimate partner violence starts with hetero-patriarchal and hetero-normative sanctions, such as against femininity in males and against same-sex or mixed gender identity relationships. This leads to inequality in intimate relationships – usually to the feminine partner’s disadvantage. The emotional, sexual and financial burden to keep the relationship going falls on this partner who has to tolerate physical and sexual abuse from the masculine partner who often may have multiple sexual partners. The feminine partner may also have to rely on exploitative sex work to earn money for survival and to maintain the partner. Such unrelenting abuse impacts the feminine partner’s mental health and also increases risk for STI and HIV infections. Then again poor mental health and unsafe sex feed into each other. 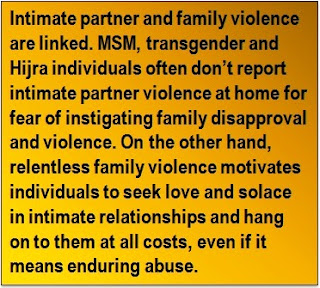 Key recommendations: MSM, transgender and Hijra community peers and leaders (including Hijra gurus), CBOs, NGOs, health care providers and other stakeholders from the legal, social welfare, education, media and government sectors all need to play a complementary role in strengthening HIV interventions to tackle violence and trauma. Greater allocation of financial resources, strong advocacy action, skills building and systematic monitoring and evaluation of anti-violence measures should form the backbone of the strengthening process.

Prevention measures: Include community education on gender, sexuality and human rights, provision of emotional first aid to victims of violence by community peers and encouraging the victims to access relationship and family counselling services, dedicated helplines on violence and trauma, gender and sexuality education in educational institutions, and consistent advocacy to bring about a positive transformation in the media portrayal of MSM, transgender and Hijra communities. Prevention measures at all levels should discourage normalization of violence and victim blaming.

Protection measures: Should focus on advocacy for legal reforms (including repeal of punitive laws against MSM, transgender and Hijra communities), ensuring widespread legal aid availability from trained and sensitized lawyers, facilitating legal literacy and strengthening the Crisis Response Teams (CRTs) in targeted interventions for HIV prevention. CRTs must undertake consistent advocacy with the police, build on existing goodwill with them, and sensitize them to avoid victim blaming and instead respond effectively to intimate partner and family violence.

Mitigation measures: Must start with counselling to deal with post-traumatic stress disorder, depression and suicidal tendencies along with “counselling-plus” that addresses a range of immediate and long-term needs around emergency medical aid, STI/HIV testing and treatment, short-term shelter options, and different forms of therapy for emotional and physical healing. Ensuring swift clarification and implementation of the Supreme Court judgment on transgender identities and rights can be a major step towards mitigation of frequent injustices experienced by transgender and Hijra communities. This may well help equip them with emotional and financial independence needed to gain equitable footing and prevent violence.

Finally, the design and budgets of HIV interventions must include a range of measures to boldly address intimate partner, family and other forms of violence. HIV interventions need to reinvent themselves as sensitive and effective public health and social justice interventions.

The full policy brief (with more data and photographs) can be accessed here.
Posted by Varta at 02:09