Through the prism of gender diversity

Pallav Bonerjee continues his series of personal narratives on psychology, people and destiny, this time on the need to do away with biases around gender and sexuality

From our very early childhood years, we are taught by our parents, elders and teachers to evaluate almost everything from the ‘good-bad’ and ‘right-wrong’ perspective. It is an essential component of the socialisation process, where we learn to stay away from the ‘bad/wrong’ and work towards all that is considered ‘good/right’ for us. Through consistent use of rewards and punishments, we are primed to identify objects, activities, places, events, situations and people through that very same lens, judging them quickly and modifying our actions accordingly. We hardly ever try to find the basis of these evaluations, mainly because we may be too young to ask at the time they are being formed. Gradually, they become part of our value systems and belief patterns, thereby shaping our attitudes. It is a very efficient process; one that helps us with decision making on a day-to-day basis effortlessly. So that, effortful thinking is preserved mainly for the more important and bigger decisions that would affect our lives.


However, what would happen if we were to find out that some of those implicit belief patterns were incorrect and we have become prejudiced as a consequence of them? What if one day it dawned on us that because of some such belief systems that were passed on to us, we have started behaving differently towards a section of our society, thinking lesser of them or treating them with a sense of disdain and apathy? What if one day, we realised that some of our attitudes towards a certain kind of people were unfair and we never questioned those beliefs or tried to evaluate why we felt the way we did? What if our education proved to be our undoing, by giving us the freedom and capacity to start thinking independently and stripped us of the shackles of those biased thought patterns? That day may prove to be a very difficult day for us. For it is always easier to point a finger at a neighbour and cry foul. But it may not be that easy to accept that some of our own thought processes and belief systems are prejudiced, making us discriminate between two individuals on the basis of a variable that can’t be boxed into pre-conceived categories. That variable is ‘gender’. 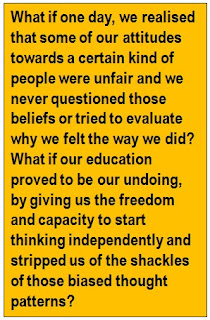 Gender is a broad term and there are various sub-themes within it that may warrant independent space for discussion in their own right. I shall not get into defining gender or turning this into a clinical discussion or a didactic. I feel that change needs to come about from within, for it to last. Change brought about forcefully, or from without, usually lasts as long as the external situation exists, and then it goes back to its earlier state. The debates and mindsets on the various sub-themes within gender, therefore, are more internal than external. They are part of the values and belief systems that have been passed on to us and we have accepted them unquestionably for so long. Be it gender role stereotypes, gender identities or gender orientations (also referred to as sexual orientations).

With time, there has also been a secret universal validation of considering the traditional belief systems as ‘good/right’ and any deviation from that as ‘bad/wrong’. And historically, as a society we have used every trick in the rule book to stay away from the ‘deviants’ by fearing them, isolating them, punishing them, trying to rectify them using unscientific and inhuman methods, discriminating against them blatantly and looking through them, as if they did not exist. We have taught our children the same philosophy of intolerance and violence, both implicit and explicit, thereby successfully creating and promoting a very strong ‘good-us/bad-them, right-us/wrong-them’ divide. 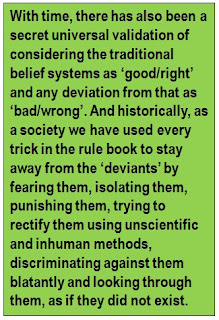 My wife (who is also a clinical psychologist) and I have had the opportunity to work actively with the communities of men who have sex with men (MSM), male-to-female transgender persons and Hijras in the past few years through an NGO. Our involvement was through a project that involved capacity building and training grass roots level community health workers and counsellors on basic counselling skills to work with MSM, transgender and Hijra communities, which are considered among the socio-economically most marginalized in India and as a consequence of this marginalization, vulnerable to a number of health problems.

Our work involved travelling across the country and meeting people from these communities and interacting with them on an ongoing basis. From their stories and experiences, we developed a training module based on case studies, role plays, skits and teaching curriculum that addressed the theme of building counselling skills. We were very excited to see how some participants without any major formal qualifications were able to pick up the skills and adapt them to suit their respective communities. Where language became a barrier, we used translators and improvised. We had participants from the MSM, transgender and Hijra communities who acted as peer counsellors as they were identified to have better influencing capacities on the communities concerned. 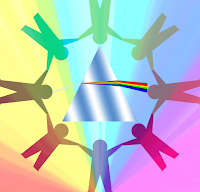 During one of many such journeys that I made, one would always stay with me. It was in Bengaluru. I arrived at the airport and was waiting to be picked up. The cab arrived and I was pleasantly surprised to find a lady driver. She was short, with grey hair and a happy face. She introduced herself and helped me with the luggage. In the car, she told me that it would take us about an hour to reach the destination. She seemed chatty and started asking me about my line of work and whether it was my first time in the city. After a while I confessed to her that I was surprised to see a woman as a driver for a radio cab service. To that she gave out a hearty laugh and said that she owned the car and intended to buy her own fleet of cars one day. She proudly announced that she was the first woman in the city to have started a venture of this sort and had the Chairperson and Managing Director of Biocon Ltd., Kiran Mazumdar Shaw, as one of her faithful patrons!

I was impressed. She drove very well and was fearless on the road. While driving, she received a few calls on her iphone from prospective clients and I could see that she was a great entrepreneur herself. Before I got off, she mentioned that she had been a part of the same NGO where I was to take a training workshop and was also a member of the communities the NGO worked with (that is, lesbian, gay, bisexual and transgender communities). She had left the NGO only recently to start her own business venture.

During my subsequent visits to Bengaluru, I made sure that she got my business and also recommended her to other friends and colleagues, partly because I wanted to encourage her grit and partly because I was curious to understand if she would manage to stay on in this highly competitive industry. Thankfully, she managed to stick on. 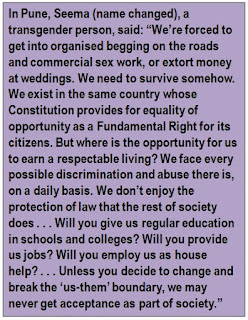 Since she knew that I was a mental health professional, during our long journeys to and from the airport, she opened up about her life, family, education, work and partner. It became like informal and unstructured therapy sessions. I did not interrupt her train of thoughts and she never asked for any advice in specific. She just spoke, sometimes laughed, got angry, cried a few times as well. She hailed from a village on the Andhra Pradesh-Karnataka border, but had to move to Karnataka for work, since her family rejected her as soon as she mustered the courage to disclose her sexual orientation. She chose not to compromise on her dignity and joined the NGO that supported people with similar backgrounds from adjoining suburban and rural areas and gave them productive work. But she wanted to do more and so acquired a skill (driving) and worked for a car rental service company for a while till she was confident of opening her own company with a bank loan and some help from the NGO.

From all that she told me, it was amply clear that her journey had not been a bed of roses. She faced prejudices and discrimination at every stage of her growth and it was more challenging since she was taking up a role that was considered to be more for a man. She giggled like a child while narrating her love stories with her partner and had silent tears when remembering her family members. It didn’t feel that she was any different from any of us in any possible way. However, her gender, or rather society’s attitude towards it, had taken away a lot from her. Amidst all the success and hype, she felt lonely at the end of the day.

During a group session with the trainees of a workshop in Pune, Seema (name changed), a transgender person, said: “We’re forced to get into organised begging on the roads and commercial sex work, or extort money at weddings. We need to survive somehow. We exist in the same country whose Constitution provides for equality of opportunity as a Fundamental Right for its citizens. But where is the opportunity for us to earn a respectable living? We face every possible discrimination and abuse there is, on a daily basis. We don’t enjoy the protection of law that the rest of society does. We hardly have any rights, and the few that we have are violated every now and again by members from your own society. Will you give us regular education in schools and colleges? Will you provide us jobs? Will you employ us as house help? Will you stop fearing us as if we were some sort of a morbid infection? Unless you decide to change and break the ‘us-them’ boundary, we may never get acceptance as part of society.”

I don’t think I could ever have conveyed my sense of frustration and anger so clearly and unequivocally without getting aggressive. I also think it’s time we as a society started taking people like Seema seriously.

Pallav Bonerjee is Consultant Clinical Psychologist at VIMHANS Hospital, New Delhi. Whenever stressed, he never fails to spend some time with his own therapist, who has a wet, black nose and goes by the name of Copper!
Posted by Varta at 00:30