My friend is a bisexual man and has been a victim of blackmail by someone known to him. The blackmailer threatened to expose my friend's sexual relations with another man to my friend's parents and had to be paid money to keep quiet. Is there any law at all that can be used to protect my friend from this blackmailer?
Anonymous, Kolkata


The offence of blackmailing is legally termed as ‘extortion’ and is dealt with between Sections 383 to 389 of the Indian Penal Code. Section 383 defines extortion as an act of intentionally putting someone in fear of any injury (harm illegally caused to their body, mind, reputation or property) and making the person pay up. Even if the actual extortion doesn’t happen, the person may be put in fear or an attempt is made to put the person in fear – the same is punishable too.

The offence of extortion only takes within its ambit squeezing out of money or any valuable security but Section 383 will not be attracted if the offender forces the victim to have sex with him or her. In that case it will be a separate offence under Section 376 or 377, as the case maybe. 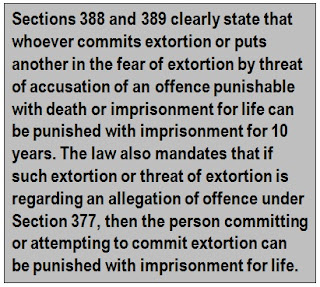 Therefore, if any person, including a police official, asks for money from someone on the threat of exposing them for having committed an offence under Section 377, a complaint can be lodged under Sections 388 or 389, as the case maybe. It is important to have substantial evidence since finally it is the complainant’s word against the blackmailer’s. Therefore, a video or audio recording of such extortion helps in proving the allegation.

It is important to report a crime of extortion or else the same can’t be investigated and punished. The person who is put under fear needs to be courageous and should be supported by well-wishers to lodge a complaint against the blackmailer. However, it must be kept in mind that the reason for which the complainant was being blackmailed might also surface during the investigation and one has to be very careful about maintaining one’s privacy since neither our legal system nor the investigating agencies are sensitive enough to ensure the protection of privacy.

Kaushik Gupta is a lawyer by profession, a photographer by passion, and happy to answer your queries on legal matters around gender and sexuality. Write in your queries to vartablog@gmail.com, and they will be answered with due respect to confidentiality.
Posted by Varta at 00:30