My Story, Jan '16
Continuing a series of personal narratives on psychology, people and destiny, Pallav Bonerjee writes about his epiphany of the New Year – the secret to a good life 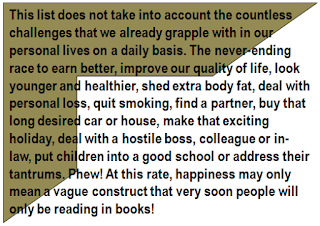 The New Year did begin with a bang. We had barely recovered from celebratory hangovers and sat down with our new list of resolutions and there was already a parallel list of incrementing stressors, setting in a flavour for the times to come. Delhi’s toxic air was crowned once again as the worst possible in the world. This led to a new ‘odd-even’ formula for taking cars out on the streets for the first 15 days of the month in the entire National Capital Region. This led to many interesting discussions, jokes, fan fare, heated debates and public opinion polls. Eventually, we gave in and settled down.


The North-East (Manipur) came in the news for having sustained an earthquake of fairly strong intensity (magnitude 6.7 on the Richter Scale). Then there were the infiltrators at Pathankot, who targeted the airbase and killed our jawans. Last night on TV, they were discussing how a Supreme Court of India order to ban the age-old Tamil tradition of celebrating Jallikattu (a bull-taming sport as part of Pongal celebrations) had resulted in a major conflict between animal rights activists backed by the Honourable Supreme Court on one side and the Tamil Nadu state government on the other. Apparently, many of the bulls are injured and made to consume alcohol in order for them to become restive, which results in multiple forms of cruelty against them during the sport.

This list does not take into account the countless challenges that we already grapple with in our personal lives on a daily basis. The never-ending race to earn better, improve our quality of life, look younger and healthier, shed extra body fat, deal with personal loss, quit smoking, find a partner, buy that long desired car or house, make that exciting holiday, deal with a hostile boss, colleague or in-law, put children into a good school or address their tantrums. Phew! At this rate, happiness may only mean a vague construct that very soon people will only be reading in books! But let’s pause here for a moment.

While rummaging through my email inbox, I came across something interesting (also this year!) that I think can help us put things in perspective. A team of professionals at the Harvard Medical School led by Dr. Robert J. Waldinger, Clinical Professor of Psychiatry, are conducting longitudinal research on a large number of people in USA in order to understand “what makes a good life”. The question they have in mind is that if you invest now in your future best self, where will you put your time and your energy? This study is now referred in professional circles as the longest study on happiness and the findings have indeed surprised many. The Study of Adult Development tracks the lives of 724 men year after year – it has been doing so for 75 long years, asking them about their work, home and health since 1938. So what have they learnt from the extensive qualitative and quantitative data so far? In a nutshell, what seems to matter in the long run in the lives of all the participants are good relationships – stable and fulfilling relationships constitute the single-most important factor that contributes to a long, happy and healthy life.

The three important lessons that the researchers draw from this study can help address the most fundamental issues that we seem to keep struggling with time and again. First, social connections are really good for us and that loneliness is indeed toxic. Second, it is always quality over quantity in relationships that matters eventually. Finally, fulfilling relationships act as protecting agents, helping us not just emotionally, but also cognitively, by buffering us against age-related memory decline and other such syndromes. In short: “The good life is built with good relationships.”

Most people who seek treatment or therapy for mental health and related challenges also have better prognosis if they have a supportive family, irrespective of the nature and duration of illness. In the same way, the absence of a strong network of well-meaning family members and / or friends tends to escalate and magnify even the simplest of stressors for most people. In today’s age of e-friends via social media, where most of us have many friends online and very few offline, the Harvard Medical School study almost comes as a warning signal. It has become increasingly important for us to reflect on the nature and depth of the relationships that social media seem to offer. The trend here is always on the number of connections, rather that the quality of those connections. Youngsters find it very exciting to get introduced to age mates with the click of a button. This has led to a steady decline in physical play activities and increase in social awkwardness when meeting others. 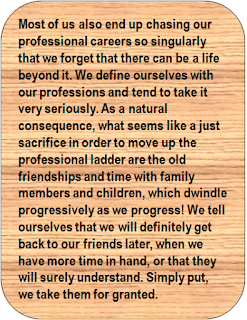 Unfortunately, smart phones and tablets have not helped the case at all. Many parents have found it convenient to thrust such fancy gadgets in the hands of their children to compensate for their unavailability in the name of good parenting. For the youngsters, this has opened a new unsupervised world of freedom. The breaking down of the joint family set-ups coupled with working parents have also meant more time alone at home for children. The smart phones and the virtual world have thus become a dominant tool to address that need of social affiliation and a feeling of being connected with others. But it is these very parents who will later reprimand the children for spending far too much time online, instead of managing academic responsibilities better and participating in household chores, thereby leading to conflicts during adolescent years and young adulthood.

Most of us also end up chasing our professional careers so singularly that we forget that there can be a life beyond it. We define ourselves with our professions and tend to take it very seriously. As a natural consequence, what seems like a just sacrifice in order to move up the professional ladder are the old friendships and time with family members and children, which dwindle progressively as we progress! We tell ourselves that we will definitely get back to our friends later, when we have more time in hand, or that they will surely understand. Simply put, we take them for granted.

Unfortunately, in the absence of lasting relationships, we may not have caring people around us when we feel that the time has finally come to shift focus from work. It might then be a little too late. It just happened to me! I was shocked and very disturbed to learn about the sad demise of a close school friend a few weeks ago. He was 33, battling cancer for the better part of 2015 and couldn’t make it into the New Year. It is such news that makes one rethink priorities in life all over again. Did we get it all wrong all this while? Chasing the good life, but never really getting there. In the process, we leave behind the merry memories of childhood days, school friends, cousins, family friends, neighbourhood buddies and partners-in-crime!

It is during these moments of conflict that one desperately needs clarity of thought and reassurance. I have certainly found my sense of clarity. Having put aside all the resolutions for the year, I have decided to focus on just one – reconnecting with old friends this year. That I believe shall be a step in the right direction for me in my quest for happiness. How about you?

Pallav Bonerjee is Consultant Clinical Psychologist at VIMHANS Hospital, New Delhi. Whenever stressed, he never fails to spend some time with his own therapist, who has a wet, black nose and goes by the name of Copper!
Posted by Varta at 22:45