From the Archives, Jan '14
Zaid Al Baset delves into the Counsel Club archives and finds a world of desire that no law can suppress or wish away. These series of articles intend to create an archive of the queer movement in Bengal and India – not a chronological narrative of the movement, rather anecdotal histories capturing the little voices that are often lost in general historical accounts – voices from thousands of letters received by Counsel Club, one of India’s earliest queer support groups (1993 to 2002), and from the group’s house journal Pravartak.

In October 1994, Mr. Mazumdar wrote to Pawan (a Counsel Club member), “Normally sometime, I sit quietly in the benches at Ballygunge Lake, near roadside benches, normally opposite the Menoka Cinema Hall / Lake Kali Temple grounds towards the lake side lawn, mostly evenings 5-8 pm (Monday to Friday), because after 8 pm police and CID officials patrol the areas to catch both male and female couples and gay couples to extract money and harass unnecessarily”. Mr. Mazumdar does not mention any instance of him being caught or any sexual encounter he may have had. In the letter, he appears as a lonely voyeur.

The year 1994 was a significant one. AIDS Bhedbhav Virodhi Andolan had filed a petition in the Delhi High Court challenging the constitutional validity of Section 377, Indian Penal Code. Most letters that were written to Counsel Club, with notable exceptions, were innocent of any allusions to this draconian law. These letters, as I have suggested earlier, were forging an imagined community of lovers whose love was illegal. They were often solipsist in their expression, each man reveling in his own loneliness, the impossibility of his desire, and the fear that it may reveal itself to significant others. This fear of self-disclosure was expressed rarely in terms of the law, but the immediate family. But of course, most of these letters were written by middle class men.

Section 377 criminalizes ‘carnal intercourse’ against the ‘order of nature’. The vagueness of the terms have ensured that any sexual act which is not or does not lead to peno-vaginal penetration and carries the potential of procreation is a ‘lusty’ ,‘impure’, ‘animal’ act against the order of nature; nature being ‘the basic instincts or impulses of someone or something’. 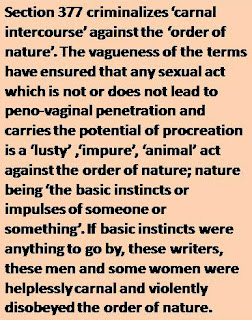 In 2001, Naz Foundation (India) Trust filed a second petition challenging Section 377 in the Delhi High Court, the same whose story still continues. In 2003, the Home Ministry of India filed an affidavit in favour of retaining Section 377 on the grounds that there existed public disapproval of homosexuality in India and that repealing Section 377 would open the “floodgates of delinquent behaviour”. But these letters were dangerous and revealed desire that existed in spite of laws like Section 377.

Counsel Club received letters from outside West Bengal too. ‘Delinquent behaviour’ has a pan-Indian flavour. SK wrote from Secunderabad in 1998: “Naturally every Calcutta ‘gay’ guy must be unique – but I will put it as sweet because of roshogulla, chamcham and sandesh . . . but Calcutta guys can’t be compared to Andhra chaps. Andhra chaps are hot chaps because in Guntur district – they eat a lot of mango pickle. Hot! hot rice with lots of red colour mango pickle served with a teaspoon of ghee makes lively food”. In his third letter to Counsel Club SK complains, “The Andhra chaps are terrible chaps. They have big tummies and after a couple of minutes get tired – being rice eaters they are terrible fuckers – a good lot of my friends have gone abroad or have settled down in a faraway place”. Desire, clearly, makes the world go round.

While ‘queer’ in the queer movement in India represents the fluidity of gender and sexual identities (and rightly so), there is a terrible fixity to felt desire. Desire can confront individuals as rigid, inflexible, spontaneous, immutable, pure, basic, or simply ‘natural’. It is an excruciating struggle to accept one’s spontaneous desire that is deemed as ‘unnatural’. These letters are a vent to these ‘unnatural’ yet ‘natural’ desires.

The letters also reveal a typology of men. Sample this: “My statistics are: I am 27 years old but look 23 or 22. I am bottom, looking for top man – should be tall dark athletic looking with a sense of humour, kind hearted and very sport loving, I look like Chinese with honey complexion”. Many letters to Counsel Club, especially penned by men, provided bodily description of the writers and the description of the men that they desired and hoped to meet via Counsel Club. One of the letters carried a diagram of the penis of the writer. The caption to the diagram read: “Your code will be Joy (G)”! The writer mentioned the size of his ‘tool’. Below this diagram was a peculiar doodle, hard to interpret. It seemed to resemble the genitals of Aristophanes’ ‘proto man’, creatures who were divided by Zeus, where each half becomes the same-sex desiring man! I am not sure if the resemblance was intended.

These descriptions seemed to anticipate the profile descriptions of the gay dating site Planet Romeo. The layout of the site, which resembles a pornographic site, contains such descriptions which may appear discriminatory. For instance, “Uncles and effeminate men stay away”. There are no diagrams but users upload their own, often naked pictures. Desire, though, experienced spontaneously is often classist, ageist and homophobic.

On December 11, 2013 (11.12.13), the Supreme Court declared as legally untenable the 2009 judgment of the Delhi High Court, which read down Section 377 to allow consensual sexual acts between adults in private. The Supreme Court judgment states: “Those who indulge in carnal intercourse in the ordinary course and those who indulge in the carnal intercourse against the order of nature constitute different classes of people and the people falling in the latter category cannot claim that Section 377 suffers from the vice of arbitrariness and irrational classification”.

The judgment also clarifies that “Section 377 does not criminalize a particular people or identity. It merely identifies certain acts which if committed would constitute an offence. Such a prohibition regulates sexual conduct regardless of gender identity and orientation”. It is a queer judgment indeed! While it tries to separate the registers of acts and identities, it creates its own class of people. Strictly speaking, this new ‘class’ based on indulgence in the carnal intercourse against the order of nature should not be conflated with the ‘so called LGBT’ or the ‘miniscule minorities’ of India (as the Supreme Court calls it) even though Section 377 will continue to be the reason for the violation of their rights.

The judgment has sparked global rage. Section 377 produces an unjust and an untenable script of desire. Yet no law can or will succeed in taming desire and its expressions, overt or covert. The letters to Counsel Club are witness to that history of protest. The very act of writing, desiring and being is a register of protest!

Note: Names and other identity markers have been modified to protect the identity of the letter writers.

Zaid Al Baset is a doctoral student at the Centre for Studies in Social Sciences, Kolkata. He can be contacted at zaidalbaset@gmail.com.

Email ThisBlogThis!Share to TwitterShare to FacebookShare to Pinterest
Labels: From the Archives