Not on the margins

On December 10, 2013, I went to sleep thinking about the celebrations the day after but I woke up on December 11 to my friend’s phone call. She was in tears, “My parents would rather have me married than arrested. They are constantly saying that even the Supreme Court thinks my ‘lifestyle’ is illegal.”


I wasn’t sure if she was pulling a prank on me. But no, the perfectly symmetrical 11.12.13 had tossed at us a judgment that sent shockwaves through the country’s lesbian, gay, bisexual, transgender and other queer communities. The Supreme Court had overruled the Delhi High Court ruling of July 2009 that read down Section 377 of the Indian Penal Code (IPC), decriminalizing sex between two consenting adults, including ‘gay sex’.

The Delhi High Court had ruled in 2009 that Section 377 was in violation of Article 14 of the Constitution that guaranteed equality before law, Article 15 which prohibited discrimination on the basis of religion, race, caste, sex or place of birth, and Article 21 which guaranteed protection of life and personal liberty. But the Supreme Court stated that the section can be repealed or amended only by the Indian Parliament. Mark its words, “While reading down Section 377 IPC, the Division Bench of the High Court overlooked that a miniscule fraction of the country’s population constitute lesbians, gays, bisexuals or transgenders and in last more than 150 years less than 200 persons have been prosecuted (as per the reported orders) for committing offence under Section 377 IPC and this cannot be made sound basis for declaring that section ultra vires the provisions of Articles 14, 15 and 21 of the Constitution.”

Let the word “miniscule” be stressed! So, is the implication that just because by sheer numbers the queer community is a minority, it can do without basic human rights? If quantity is the yardstick, then surely we need not fight discrimination against the disabled, religious minorities or the tribals any more.

As per official estimates (and history will vouch for the ‘veracity’ of such estimates!), only 200 people have been prosecuted under this section. So is the implication that identities need to be hierarchized on the basis of numbers for dispensation of justice? Yet, human rights groups like the People’s Union of Civil Liberties, Karnataka have extensively researched and published reports on how Section 377 has been widely used by the police and society at large to harass homosexuals, male sex workers and trans women. Extortion, blackmail, rape, physical assaults have gone unreported in a climate of fear. What if my family, neighbourhood or office comes to know of my orientation? Will I lose my job? Will my family disown me? Do I have affordable legal support at hand? These are some very basic questions that have played on the minds of lakhs of people from within the community.

Section 377 does not imply that one can simply be arrested for one’s gender identity or sexual orientation. Strict material evidence of specific sexual acts is necessary for arrest. But fear creates a vicious cycle of ignorance and more fear. Facts get subsumed and a threat becomes enough to buckle under. This section, in conjunction with the country’s reactionary obscenity laws, becomes a potent cocktail for further harassment.

Post the Delhi High Court ruling there was a general climate of optimism around the rights of queer people. This is not to say that police harassment stopped or lesbians stopped committing suicide. In fact, in 2013 itself, the Chennai Pride Walk was not given permission to take its walk through the beach, unlike other years and they had to change their route at the last moment. The first Hyderabad Pride Walk in 2013 was given a route that had minimum traffic for most parts and hence minimum visibility.

Yet, in recent years, many queer collectives conducted regular workshops with the police and medical establishments for gender and sexuality sensitization and found a largely receptive audience. Nine trans women across the country came together to produce a music album; Bollywood explored overtly queer themes (a Hindi film Bombay Talkies, which was a compilation of four short films celebrating 100 years of Indian cinema last year, dealt with homosexuality and transgender issues in two of the shorts); television soaps featured queer tracks; commercials were targeted at the queer community hailing the assertive modern Indian gay and lesbian in the metro with sizable purchasing power. So much so, that many researchers (including myself) started writing about elitism in the Queer Movement. And in this backdrop, such a verdict!

Complaints of harassment are pouring in. A friend, Deep (name changed) recounts the horror of not being allowed to enter his locality on the night of December 11. His fault? He is effeminate and therefore a “377 case”.

However, is this to say that we have gone back on all the progress that has been made in the last few years? The answer is an emphatic “No”! Look at the protests since the Supreme Court judgment. It is heartening to see that not only queer groups but ‘mainstream’ society too has come forward in solidarity. Students unions of different colleges, Left organizations and women’s rights groups have expressed varying degrees of solidarity. Forums like Gay for a Day have come up on Facebook, where straight people are putting up intimate photos with same-sex friends to show support. 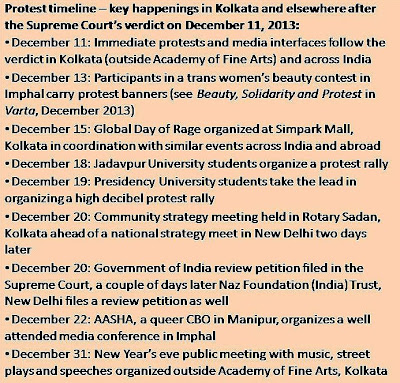 At one massive rally in Kolkata, students occupied a busy thoroughfare on a weekday and brought traffic to a halt while chants like “One, two, three, four . . . 377 no more!”, “Love is not a crime”, “Lesbian maange aazaadi, gay maange aazaadi” rent the air. This level of mobilization was unprecedented. More often than not, queer collectives have had to face stiff opposition from other movements as “sex is last on our agenda”. But the Supreme Court ruling, if nothing else, has at least provided an ample opportunity to provide a fresh momentum to the queer movement.

This is not to say that a revolution is here or that the nature of rallies and protests are wholly unproblematic. While that merits a separate essay, it is imperative to note here that Section 377 is not about a marginalized community. It is not about ‘an other’ who you can give rights in dole. It is about basic human rights, the rights to exercise one’s agency, one’s bodily autonomy, the right to be oneself! 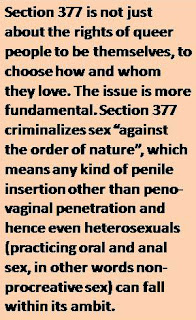 In effect, the State is entering one’s bedroom and infringing on one’s integrity and bodily autonomy. It is dictating one’s sex life. So anybody, irrespective of any sexual orientation, should be concerned by this judgment, a fact yet to be highlighted by the media. The largest democracy of the world is faced with a very basic question. Is it even a democracy if it cannot uphold the Fundamental Rights of its citizen subjects?

Yes, the Government of India has filed a review petition against the Supreme Court verdict and the law will take its due course, but here we are at a crossroads of history where embedded structures can either be uprooted or be firmly entrenched. There is no going back.

Senior Editor with Kindle Magazine, Sayan Bhattacharya loves labels like queer feminist, film buff and humour junkie, but isn’t sure of using them. He can be reached at sayan@kindlemag.in.
Posted by Varta at 22:35