Insight, Happenings, Oct '15
Sukhdeep Singh recounts how 19-year-old trans man Shivy, a student of neurobiology, won an emotional and legal battle against his parents’ transphobia and trickery to marry him off forcibly

Delhi, October 5, 2015: When Shivy (born Shivani Bhat) came to India from USA with his mother in July this year, little did he realize that his own family would turn against him and make him a ‘prisoner’ in the country. What followed was a riveting story of exemplary courage shown by Shivy and a number of queer activists in Delhi who helped him escape his family’s clutches. The story culminated today in an equally brave verdict by the Delhi High Court, which directed the police to ensure that Shivy got back his identity and travel documents from his family and was able to return to USA.

Shivy, who holds a green card and studies in the University of California, Davis, came to India with his mother to meet his maternal grandparents in Agra. Nothing unusual he said, for this was a yearly ritual. However, after landing in India, he soon found out that his mother and extended family members had other plans. His father, who had not travelled to India, was also involved in the entire matter.

Trouble, Shivy said in a video posted online, actually began back in USA when he decided to cut his hair short. He said about his mother: “She has always been very conservative in her outlook – boys should keep their hair short, girls should wear them long.” When his mother went through the messages on his mobile phone and realized that he had a girl friend, things became worse. Unable to bear the suffocating environment at home, Shivy started living with a friend in USA. After some time he received an email from his mother that his grandmother was seriously ill and she asked him to accompany her to Agra.

Once in Agra, Shivy’s family took away his passport, green card and other identity documents, and denied him access to a phone and computer. The two-week trip got extended indefinitely when he was enrolled in a local college. But Shivy managed to contact his girl friend in USA, who in turn intimated Nazariya Queer Feminist Resource Group about the situation. A plan to rescue Shivy was quickly put in place. 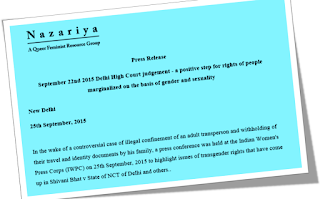 On the designated day, Shivy left a note at home stating that he was leaving of his own free will and instead of going to college, met the activists waiting for him at a certain place in Agra. “The first thing we had to confirm was if Shivy was legally an adult or not,” said Lesley Esteves, one of the activists. Once they were certain about Shivy’s age, he travelled with them to Delhi, but soon after the activists found themselves in trouble. Shivy’s parents lodged a complaint of kidnapping, and the Uttar Pradesh police personnel, accompanied by their Delhi counterparts, landed on the doors of the activists on September 21, 2015.

“There were around 60 cops at my door, asking about my whereabouts from my neighbours without any kind of warrant and aided by the Delhi Police,” recalled Lesley Esteves, who wasn’t at home when the cops came calling. The very next day Shivy and the activists moved the Delhi High Court seeking protection against harassment, intimidation and coercion by Shivy’s family and the police, and to ask for the return of his identity and travel documents. The court came to the rescue of the teenager and passed an interim order protecting him and the activists from further police harassment. Uttar Pradesh Police, Delhi Police and Shivy’s family were also issued notices to appear before the court as respondents. The next hearing was fixed for today.

On September 25, 2015, Nazariya Queer Feminist Resource Group and other queer support forums organized a media conference at the Indian Women’s Press Corps in Delhi. A visibly relieved Shivy recalled the emotional abuse he had to go through and the increasingly manipulative methods employed by his family to control his life and force him into an arranged marriage. Rituparna Borah, a queer feminist, remarked how the perception that family was a ‘safe space’ was belied time and again in the case of many queer individuals. They seemed to face the greatest threats and violence from their own families. “Yet,” she pointed out, “Media persons keep asking Shivy just one question – ‘Are you happy now, do you want to back go to your family?’”

Shivy corroborated Rituparna Borah: “I’m happy that I’m here, it gave me safety. But my parents still refuse to hand over my passport and green card. I don’t know if I can trust them anymore.” 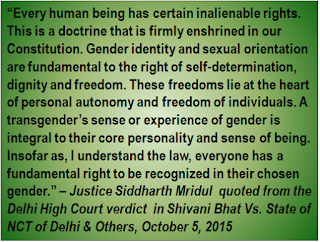 In the hearing held today, the court, as indicated in its interim order, ruled in favour of Shivy and ordered his family to return all his documents. “Every human being has certain inalienable rights. This is a doctrine that is firmly enshrined in our Constitution. Gender identity and sexual orientation are fundamental to the right of self-determination, dignity and freedom. These freedoms lie at the heart of personal autonomy and freedom of individuals. A transgender’s sense or experience of gender is integral to their core personality and sense of being. Insofar as, I understand the law, everyone has a fundamental right to be recognized in their chosen gender. This view is buttressed by the landmark decision of the Supreme Court in National Legal Services Authority (supra),” the court said in its verdict passed by Justice Siddharth Mridul.

Elsewhere in the verdict, the court also said: “The present petition highlights and brings to the fore the socio-economic marginalization and exclusion of those whose behaviour is considered ‘inappropriate’ by society. It clearly demonstrates that those who do not conform, render themselves vulnerable to harassment and violence not just by the Police but also by society that ridicules them. Transgenders have long lived on the fringes of society, often in poverty, ostracized severely, because of their gender identity. They have for too long had to endure public ridicule and humiliation; have been socially marginalized and excluded from society, their basic human rights have been severely denuded . . . There is, thus, no gainsaying the fact that transgenders enjoy basic human rights including protection from violence and discrimination. They have the right to dignity and self-determination.”

Gender, sexuality and other human rights activists across India hailed the judgment for upholding individual liberty, while Shivy looked forward to leading a life on his own terms. He was eager to get back to his studies in USA and ready to meet the expenses involved on his own. He was sure that his friends and others would also lend a helping hand.

Sukhdeep Singh is a Facebook addict who works as a software engineer by day and transforms into a writer at night. He is the founder and editor of Gaylaxy magazine.