My Story, Oct '15
Pratulananda Das shares how mathematician Alan Mathison Turing’s life story inspired him to come to terms with his own sexual orientation


I remember the day vividly when I could not keep my eyes off the young man working in a paddy field. It was drizzling and my younger brother and I were huddled together under an umbrella on our way to school. As I grew older I realized something was ‘wrong’ with me. That puzzled me. I felt frustrated that I never had an explanation for my lack of interest in girls, while the simplest of ads showing a man in his briefs would attract me for seemingly no reason. I guess being born in a conservative Bengali family did not help much in terms of understanding what I wanted from life and what would help quell the restlessness within me. I had no one to confide in and share my anxieties with.


I decided to concentrate on academics as it was the best ‘occupation’ to keep negative thoughts at bay. I took up mathematics as a challenge and succeeded in a modest way. I secured a position in the Department of Mathematics, Jadavpur University in 1997 at a relatively young age. Today I am quite reassured, confident and relieved that I am not ‘abnormal’. But I need to express gratitude towards a person who changed my vision towards life. In him I can see myself. He is the renowned British mathematician Professor Alan Mathison Turing (1912-54) whom I discovered when I happened to read Alan Turing: The Enigma by Professor Andrew Hodges during one of my many trips overseas. The more I read about him, the more I got motivated to explore myself. But this was not till after I got married.

Like many men, I too faced pressure from my family members to get married. I did give in and had two wonderful children. But deep inside I knew I had not done justice to myself and felt as if I was wearing a mask. Frustration and depression followed. This was the time I took up reading about gay scientists. I did not come across very many scientists, let alone mathematicians, who were gay. I wanted to read about their personal lives and find out how they came out in the open about their sexual orientation, and what treatment they received from society. I didn’t want to look back too long in time as the socio-political environment in those days would not have been relevant to my situation. 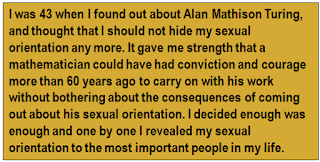 Precisely at this point of time I came to know about Alan Mathison Turing. He was born on June 23, 1912 in an upper middle-class family. After a rather restrictive childhood, he entered King's College, Cambridge as an undergraduate in 1931. This was when his sexual orientation seemed to have become a definitive part of his identity. He became more outspoken, probably aided by the liberal atmosphere of the university town. While reading about this aspect of his life, I realized that I was too timid and confused in my formative years to have explored and expressed my sexuality.

I was 43 when I found out about Alan Mathison Turing, and thought that I should not hide my sexual orientation any more. It gave me strength that a mathematician could have had conviction and courage more than 60 years ago to carry on with his work without bothering about the consequences of coming out about his sexual orientation. I decided enough was enough and one by one I revealed my sexual orientation to the most important people in my life. First, I shared my decision with my wife, who knew about my sexual orientation even before we got married. Next, I came out to my children, and then to my relatives and colleagues. Finally, one fine morning, I came out as gay in a public forum as well.

At this juncture I want to talk about the greatest support of my life, my wife Mani. I still remember the day we went to see Deepa Mehta’s Fire. After the screening, I felt breathless. Sitting face-to-face with Mani, surrounded by the darkness of the cinema hall, I revealed my sexual orientation to her. I suggested that we should put off the marriage. With tears in her eyes, she looked deep into mine. She held my hand and said, “I love you, whatever you may be, don’t leave me.” I couldn’t say no.

Mani belonged to quite a wealthy but orthodox, authoritative and conservative family, where women were not supposed to step out of home. She was the first member of her family who had a post-graduate degree and then also went on to complete her doctorate. After marriage, despite all odds, we tried to adjust with the new equation. She got the much-needed freedom to lead life in her own way, which was unthinkable earlier. She joined a reputed school as a teacher. On her part, she provided me with excellent support for my academic goals. She coped with her work and looked after our children whenever I went abroad for work. Though it took her a long time to actually accept my sexual orientation, once she did, she was always beside me. When I developed friendships with gay men, they were always welcome in my home but at the same time she was very protective. When I entered my first gay relationship, she was more than happy and when I broke up, she stood rock solid encouraging me to look for a better partner. Deep down in my heart I felt relieved and started to enjoy my life.

Coming back to Alan Mathison Turing’s life, he shifted to Manchester after World War II. Unfortunately for him, the social environment in the heavily industrialized city was far more conservative and homophobic than Cambridge. He was arrested and faced a trial in 1952 when the police learned of his sexual relationship with a young man in the city. He was sentenced to a prison term, but possibly in the interest of his intellectual pursuit he instead ‘accepted’ for the period of a year estrogen injections designed to ‘suppress homosexuality’ (this was how British law dealt with homosexuality at that time). He became eccentric, solitary, gloomy, resigned and dissatisfied. On the morning of June 8, 1954 he was found dead by his bedside by the cleaner. He had killed himself the day before – a half-eaten apple dipped in cyanide was found beside his bed.

I should not compare myself in any way to a genius like Alan Mathison Turing as I am an average mathematician. Nor did I have the courage to accept and come out about my sexual orientation from the very beginning. But one thing in his story assured me. He was never looked down upon by his peers for being open about his sexuality, and most people in the scientific community were interested in his research than his personal life. In a way, like Cambridge, the university where I render my service, which is undoubtedly one of the finest in India, also has a tradition of a liberal atmosphere. I have not faced any major problem or undue attention from most of my colleagues and students in relation to my sexual orientation, and I have been recognized and rewarded for my research work and teaching. I feel that I don’t want to make the mistake Alan Mathison Turing did – I have always desisted from leaving Jadavpur University for other institutions even for a better position.

I now strongly believe that lesbian, gay, bisexual, transgender and other queer (LGBTQ) people should come out into the open whenever they are ready – no time is too late in life to face and assert the truth. I have high regard for people, who many years ago came out early in their life, helping to change the outlook of our homophobic society and despite many struggles and setbacks fought for the rights of LGBT people. The conviction in my own identity has helped me join more and more LGBT community events as an active participant. I think this is important to make society understand people like us better and I am hopeful that we will gain more support for our struggles. Nothing is lost yet.

Professor Pratulananda Das is Professor of Mathematics at Jadavpur University, Kolkata. He has published more than 70 research papers and visited several countries to deliver lectures. In 2014, he came out about being gay in personal and professional circles and since then actively participates in LGBTQ events.
Posted by Varta at 21:09