Next step in Section 377 challenge 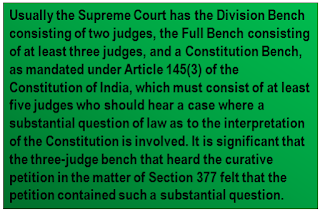 When the Honourable Supreme Court of India took up the Section 377, Indian Penal Code curative petition on February 2, 2016, why couldn't they hear out the arguments of the petitioners on that day itself? Why did they have to defer it again?
MN, Barasat


Traditionally there was no concept of a ‘curative petition’ under Indian law. The idea first came into existence in the case of Rupa Ashok Hurra Versus Ashok Hurra and Anr. in the year 2002, when the Supreme Court allowed the aggrieved party to make an application in the form of a curative petition even after the review petition filed against the final order was dismissed. It was held in the said case that in order to prevent abuse of its process and to cure gross miscarriage of justice, the apex court may reconsider its judgment in exercise of its inherent powers. Typically, a curative petition is circulated to the three senior most judges of the apex court and the judges who delivered the impugned judgment, if available. These judges decide the fate of the said curative petition.

Usually the Supreme Court has the Division Bench consisting of two judges, the Full Bench consisting of at least three judges, and a Constitution Bench, as mandated under Article 145(3) of the Constitution of India, which must consist of at least five judges who should hear a case where a substantial question of law as to the interpretation of the Constitution is involved. It is significant that the three-judge bench that heard the curative petition in the matter of Section 377 felt that the petition contained such a substantial question. Therefore this is not a case of deferring the matter.

It is important to understand that the three-judge bench felt that the issue was of such importance that it should be heard by nothing less than a Constitution Bench! This, of course, does not automatically set aside the earlier Division Bench judgment unless the said Constitution Bench holds so.

Kaushik Gupta is a lawyer by profession, a photographer by passion, and happy to answer your queries on legal matters around gender and sexuality. Write in your queries to vartablog@gmail.com, and they will be answered with due respect to confidentiality.
Posted by Varta at 23:26