The third (October 2013) and fourth (November 2013) issues of Varta carried a column called Star Quest, a series of photo-stories of individuals who may not be public figures like politicians, artistes, social activists or media persons, but have in their own way contributed to social equity and empowerment around gender, sexuality and related issues. For a variety of reasons, including priority given to other interview and photography based columns, Star Quest was discontinued. With the October 2015 issue of Varta, we revived the column to continue sharing innumerable untold stories twinkling with inspiration!

Star of the month: Gulabo (Abhimanyu Mohapatra), 69, a resident of Dhanpur village in Mayurbhanj district of Odisha. On a pleasant autumn afternoon last year, Tapan, one of my contacts for outreach on health and rights issues in Odisha, and I were passing by a quaint village. We were in an auto rickshaw, on a dusty road, somewhere in Mayurbhanj, one of the largest districts of Odisha with an expansive forest cover, hilly terrain and sparse population. We were travelling from Gundihudi village to Baripada. Tapan suddenly requested the auto rickshaw driver to stop near a pucca building in that village. He stepped out and requested me to join him and meet one of his friends. 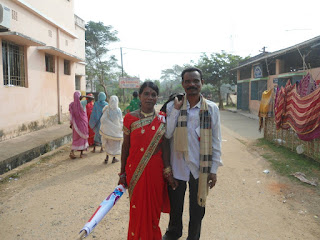 My initial thought was that Tapan wanted to introduce me to someone from the local Kothi network. I saw a group of old women beating paddy and sorting hay in the courtyard of a neighbouring house. Tapan uninhibitedly went into the house and asked the women the whereabouts of someone. I got distracted by the goings-on in the courtyard busy with men, women and poultry birds, but Tapan tapped me on the shoulder and pointed to an old woman walking down the road towards us. She looked just like the other women in the courtyard. She was carrying a hoe and wearing a simple ochre yellow printed cotton saree.

As she neared us, I saw she was also wearing a faded blue cotton blouse that fitted more like a top, and a pretty pink petticoat with frills underneath the saree, which she had draped on in a casual style that seemed common in the village. I also noticed some white specks on her cheeks. Finally, when she was at arm’s length, I realized the white specks were actually grey stubble.

It was soon going to get dark and we still had a long distance to cover to Baripada. While leaving, Tapan asked Gulabo to drop in at the office of the NGO he worked for the next day for a chat. What I learnt about Gulabo filled my heart with a sense of amazement. Born Abhimanyu Mohapatra, her sense of a feminine gender identity was a cause for concern and violence at home right from childhood. When she grew older and could bear it no longer, she left home to live and work as a servant in another household. She also had a stint at the house of a former Odia film start in Bhubaneswar. 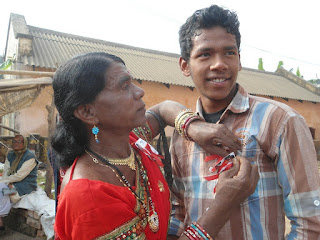 Today she is happy to be known as Gulabo (though she doesn’t mind if the villagers address her as Abhimanyu Kaka or simply Kaku). But during her youth she had no one to guide her and knew no one else like her. It was all learning by trial and error, and this also included concealing her identity, getting married and having two children, who now have children of their own. At some point of time, she took a momentous decision and decided to share everything about herself with her family. Eventually, not just her immediate family, but the entire neighbourhood came to accept her as she was (transgender, in the lingo of some people and NGOs). Today she lives with her son, daughter-in-law and grand children, though her (or ‘his’) wife passed away some time back. 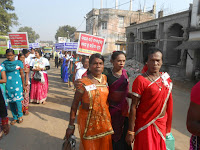 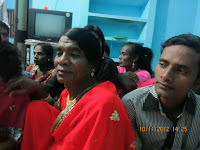 Gulabo exudes a sense of confidence and comfort regarding her identity that is rare to find. She may not have the portfolio of a firebrand activist, but her courage and patience have made her a role model in the eyes of the villagers, including other trans women. As the photographs show, she now also participates in the activities of the NGO Tapan is associated with. Meeting ‘stars’ like Gulabo always makes a positive impact on my life – personally and professionally.

Aakash is a former masseur whose love for the carnal is yet to ebb. He loves to travel and explore places, bodies and minds, and at times transgress gender roles. He digs oil massages and sweet foods. He also works for an NGO.
Posted by Varta at 00:35