Some murders ‘more foul’ than others?

In 2015 in France, 147 people were killed in terror attacks by Islamist extremists. In 2014 in France, 134 women were killed by their partners or ex-partners (all males) – numbers for 2015 are yet to be communicated. If you include suicides by victims of domestic violence, you can add around 200 women to the figure for 2014.

The first number of 147 is supposed to be an ‘historical record’, a ‘premiere’ and a ‘shock’, widely reported and commented on by the media. The second number of 134 is just ‘business as usual’. Since as long as these deaths have been counted (at least since 20-30 years), on an average in France a woman is killed by her partner every two or three days. Information about it does exist, and more now than a few years ago, but certainly not as massively as for the terrorist killings.


Following the terror attacks we had (and are still having) an emergency state, policemen and soldiers are showing up all around, our President is saying we're ‘‘at war’’, we have hours of special editions on radio and TV, newspapers are thick with all that we've already heard on TV or looked up on the Internet, and then there are declarations by politicians, intellectuals and artists.

On the murders of women we have . . . well what do we have? Not much really, certainly not all the fuss around terrorist killings (not that it would be desirable, those hawkish and Big Brother-like responses are not a good or efficient idea, ever). 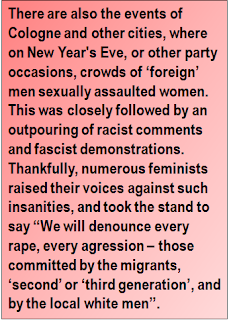 We have a Justice condemning last December a woman (Jacqueline Sauvage) to 10 years of prison time (and she's already in jail) for having killed her husband, who assaulted her and her children for decades. She killed her husband just after her son committed suicide. We have also, thankfully, petitions and demonstrations in support of her – enough to get her the Presidential ‘pardon’ on January 31, 2016! She should be out of jail coming April. But a lot of pressure had to be put on the President!

There are also the events of Cologne (in Germany) and other cities, where on New Year's Eve, or other party occasions, crowds of ‘foreign’ men sexually assaulted women. This was closely followed by an outpouring of racist comments and fascist demonstrations. Thankfully, numerous feminists raised their voices against such insanities, and took the stand to say ‘‘We will denounce every rape, every aggression – those committed by the migrants, ‘second’ or ‘third generation’, and by the local white men’’. You know the ones who go out in bunches – in Munich (Germany) for beer festivals, or in Bayonne (in France) for the city festival? Those annual celebrations during which numerous women are assaulted and raped. You didn't know about it? Well, they don’t make the headlines as the Cologne ‘‘night of fear’’ does!

Why is this so? Why do some murders provoke national sorrow, while others are passed by quite unnoticed? Why are some sexual assaults so commented on while others are just ignored or presented as ‘supposed rape’, suggesting that the woman might have somehow wanted it . . .

The identity of the aggressors seems to be part of the explanation – if they can be put in a Muslim-Arab-migrant kind of a bag, then jackpot, that's a headline, that's a topic worth writing about. If they are white-non-Muslim, it's still worthwhile information if we're talking terror attacks (though the preferred term is usually ‘‘gun fire’’ rather than ‘‘terror attack’’), but a woman’s murder will at most make for a short piece of news, and the rape of a woman not even that.

The identity of the victims might be another part of the explanation. When the victims are ‘normal’, that is, if they are men, and white, or at least if they include some white men without a police track record, information and comments will be present in the media. But if they are only women, well you know, why bother! The interest then will only be if the aggressors can be qualified as ‘others’ – Arabs, migrants, whatever. 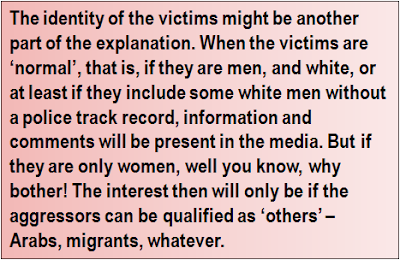 The Charlie Hebdo terror attacks in Paris and its suburbs in January 2015 took place over three days. On the second day, ‘‘only’’ one person was killed, a policewoman. If not for the protestations by her family, she would have been forgotten in the official commemorations of the terror attacks in January this year.

Also it's ‘much better’ if the aggressors don't know their victims. After the second slaughter by terrorists in Paris in November 2015, someone was interviewed in the street (it's the kind of event after which so many street interviews are done, where such shrewd remarks are made – ‘‘I was in the area’’ – ‘‘I often drink in that cafe’’ – ‘‘I know someone whose second cousin was at the concert’’, so on and so forth), and this someone said: ‘‘It's terrible to be murdered by someone you don't know.’’ Like it's so great to be murdered by someone you knew! Like perhaps your violent husband?

It appears that the gravity of the crime in a lot of people’s heads depends on the relationship between aggressor and victim. If a woman knew or knows her aggressor, what he's done to her is not as big an issue as it will be if he's a stranger, and if they are, or were at one time in a romantic / sexual / intimate relationship, then is the aggression even a crime?

Do you think I'm overdoing it? On January 4 this year, Internet users alerted the police after seeing videos of two men raping a woman who was obviously inconscious. The alert was quick, the police too acted fast and caught the rapists in the following hours in an apartment in southern France. The victim was still there, barely regaining consciousness. When it was found out that she knew her rapists (like it is in more than half of the rape cases), the media jumped to the conclusion that she was the girlfriend of one of the rapists, and rapidly changed the rape into a ‘‘presumed rape’’ and finally ‘‘libertinism’’ because she did not file a complaint right away.

Later the victim clearly stated that she did not consent to any part of what happened. Imagine her shock when the prosecutor opened an enquiry based on ‘‘medical, informatic, toxicological and psychological expertise’’ to determine if the sexual contact between the woman and the rapists was ‘‘completely and freely consented to’’!

Aude Vincent is a French feminist activist with a tropism to India. She has written articles for the magazine Offensive, an essay on Vandana Shiva, and is the co-author of books about sexism in advertisements and in the toy business.