Wow, what a month!

It is Valentine’s Day eve and Saraswati Puja (often considered Bengal’s homegrown Valentine’s Day). Just back from an inspiring launch of the Women on Wheels (WOW) programme in Kolkata and it is the time to pen down these thoughts – lest the ‘wow moment’ writers swear by passes away!

WOW, a joint initiative of Azad Foundation and Sakha Consulting Wings Pvt. Ltd. (both based in Delhi), is a women chauffeur placement service and already operates in Delhi and Jaipur. This unique programme is more than about livelihood – it is a gender equity mission, and its launch event was part of the global 'One Billion Rising' campaign to end violence against women. Organized in partnership with Thoughtshop Foundation and Kolkata Sanved, the event felicitated the first batch of fully trained nine chauffeurs, and to make a booking you can call 0091 90516 06189 or write to placementskolkata@sakhaconsultingwings.com.

One rider though (pun unintended). Several speakers at the launch event said that women drivers, including professional ones, made for better, more disciplined drivers than men. This could well be true and would seem justified as a rejoinder to the widespread male chauvinism that discourages and demeans women drivers. But do women drivers have to be necessarily better than their male counterparts to justify their right to drive an automobile? One wonders if the emphasis on ‘better’ may put an unnecessary burden on the WOW drivers and give the status quoists a handle to crow “We told you so!” every time a woman driver makes a mistake. If gender equity is about equal opportunities, it should also be about the right to make mistakes and learn every step of the way. 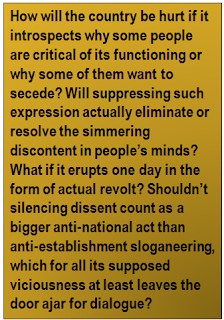 Another wow occasion unfolded earlier in the month on February 2 when the Honourable Supreme Court of India surprised many by referring a batch of curative petitions against Section 377, Indian Penal Code to a five-judge Constitution Bench for possible in-depth hearing (see Twist in Section 377 Saga! by Vivek Divan published earlier in Varta). Given the poor track record of success curative petitions have had, it was widely feared that the petitions against the Supreme Court’s December 2013 judgment on Section 377 would be dismissed outright. That this didn’t happen, that the three senior-most judges of the Supreme Court felt there might be a case to revaluate the constitutionality of Section 377 added a new zest to the 16-year old campaign against Section 377.

It is not known when the Constitution Bench will be set up and by no means can one assume what its decision will be. But hope dies hard, and there is no cure or curative for that, which is why one is hopeful that yet another wow-inducing development in February – this time in the sense of dismay and shock – will ultimately only strengthen the struggle for social equity.

On February 12, the central government ordered a police crackdown on students in Jawaharlal Nehru University, Delhi on charges of sedition. The reason cited was anti-India sloganeering at an event held in the university campus on February 9 to mark the death of Afzal Guru, who was convicted and sentenced to death for his alleged role in the December 2001 terrorist attack on the Parliament. The crackdown included an arrest of Kanhaiya Kumar, President of the Jawaharlal Nehru University Students Union, and later detention of more students. The government acted on the basis of a complaint received from a Bharatiya Janata Party leader. 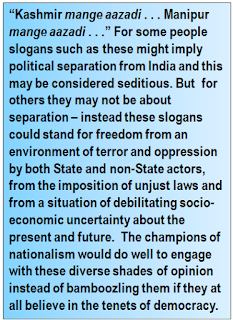 In the subsequent high-decibel accusations and counter-accusations, statements by political leaders of different hues and social media wars, the question that stands out is how can India claim to be a democracy if it cannot accommodate criticism from its own people?

The government or anyone else doesn’t have to agree with its critics, but they must respect the right of the critics to free expression, however irrational or unjustified it may seem. And criticism can always be responded to with counter-criticism. But how will the country be disintegrated if it introspects why some people are critical of its functioning or why some of them want to secede? Will suppressing such expression actually eliminate or resolve the simmering discontent in people’s minds? What if it erupts one day in the form of actual revolt? Shouldn’t silencing dissent count as anti-national rather than anti-establishment sloganeering, which for all its supposed viciousness at least leaves the door ajar for dialogue?

Pawan Dhall aspires to be a rainbow journalist and believes in taking a stand, even if it’s on the fence – the view is better from there!
Posted by Varta at 00:55