The third (October 2013) and fourth (November 2013) issues of Varta carried a column called Star Quest, a series of photo-stories of individuals who may not be public figures like politicians, artistes, social activists or media persons, but have in their own way contributed to social equity and empowerment around gender, sexuality and related issues. For a variety of reasons, including priority given to other interview and photography based columns, Star Quest was discontinued. With the October 2015 issue of Varta, we revived the column to continue sharing innumerable untold stories twinkling with inspiration!


Varta welcomes its readers to contribute to Star Quest by sending information about individuals living anywhere in India who can be portrayed in the column. Please send a brief description of the individual and their work in about 100 words to vartablog@gmail.com, and also include three to five high quality photographs of the individual depicting their day-to-day life. 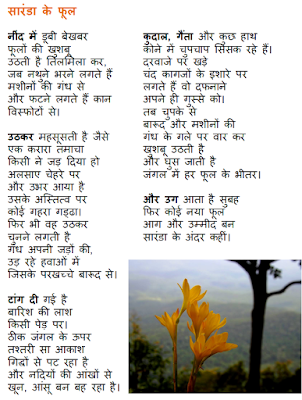 Star of the month: Jacinta Kerketta, 32-year-old resident of Ranchi, is on a mission to highlight the concerns of tribal communities in Jharkhand through poetry and freelance journalism. The author of a widely read blog Aag Aur Ummeed, Jacinta Kerketta has a quiet determination about her that compels you to listen to what she has to say. I heard her recite and sing at the closing event of the Changelooms With.in initiative of NGOs Pravah and ComMutiny – the Youth Collective in Delhi last year, and decided to learn more about her work. What strikes me is her deployment of poetry to challenge the harsh ravages of ‘development work’ in the homelands of tribal communities. Her poem Saranda Ke Phool (see inset) seems to exemplify the spirit of her quest – keeping hope alive for conservation, justice and a better tomorrow for the tribal peoples of Jharkhand.

Born in Khudpos Bandhtoli in Singhbhum (West) district of Jharkhand, Jacinta Kerketta went to school in Dumka and Chakradharpur, and intermediate college in Manoharpur. She took to writing stories and poems for magazines when she was in the eighth standard and later articles for newspapers while studying mass communication in St. Xavier’s College, Ranchi. She landed a reporter’s job in a newspaper right after graduation. But three years later, she left the job to freelance with Gulel.com website and other publications. This was in 2014, when she also received a UNDP-sponsored media fellowship from the Centre for the Study of Developing Societies, Delhi. The fellowship supported her to write about the concerns of tribal communities in the Santhal Pargana division of Jharkhand state in different publications. During this time she also managed to go back to her first love – poetry, which had taken a backseat because of professional commitments. 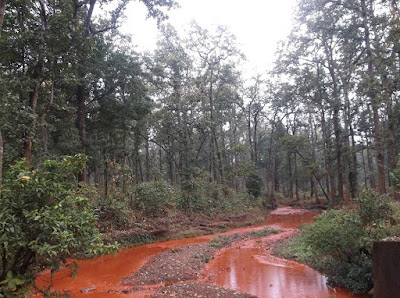 Later in 2014 poetry it was that became the centre-point of another fellowship she was awarded by Changelooms With.in. She took up the challenge of encouraging school girls in two blocks of Simdega district to highlight the problems in their areas through poetry and other forms of writing. The fellowship is over but Jacinta Kerketta has managed to sustain her work with the girls. She’s enthused by the initial signs of success, and she aims to interact more with the girls to understand their concerns better.

Imagination, conviction and willingness to hear the other side’s view point have brought Jacinta Kerketta to where she is today. Her stint in the newspaper taught her new skills and her stories on tribal issues were always encouraged by the editorial team. But she was conscious that the coverage of tribal issues by the newspaper she worked for, or any ‘mainstream’ media house, would probably always be limited by readership and commercial priorities. Thus as soon as she helped her sisters complete college, she decided to take the plunge into independent writing. Aag Aur Ummeed is an outcome of that decision. 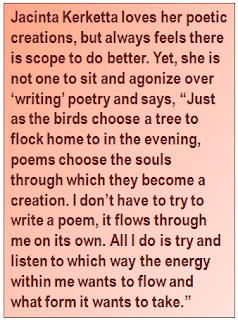 The blog, as also other social media, helps her network extensively. She is the happiest when during her travels she bumps into people who recognize her and tell her that they read her blog regularly. One such occasion was when she met the Block Development Officer of Boarijor block in Godda district of Jharkhand for some work. He turned out to be an ardent follower of her blog. Such impromptu reader feedback strengthens her belief that she is on the right track.

Jacinta Kerketta loves her poetic creations, but always feels there is scope to do better. Yet, she is not one to sit and agonize over ‘writing’ poetry and says, “Just as the birds choose a tree to flock home to in the evening, poems choose the souls through which they become a creation. I don’t have to try to write a poem, it flows through me on its own. All I do is try and listen to which way the energy within me wants to flow and what form it wants to take.”