Insight, Mar '16
Damith Chandimal believes in reclaiming ‘Ponnayā’, a derogatory term for feminine men and homosexuals in Sinhalese, as a self-reaffirming identity, not just in relation to one’s sexuality but also in questioning ethnic, religious and caste rigidities. Excerpts follow from an article he wrote recently (with editorial support from Kenneth Gunasekera): Giving up Sinhala Identity and Proudly Embracing Ponnayā as a Self-identity.

What does it mean exactly to give up an ethnic identity? Is it possible to erase one’s ethnic identity? Though it may not be possible to erase one’s ethnic roots, giving up identity could be a political decision and a political statement. Furthermore one does not have a singular identity, but multiple identities, all of which are socially constructed. It is easier to define ourselves within frameworks of these existing identities, especially within identities that are assigned at birth such as gender, ethnicity, caste, and so on. But deviating from, refusing to accept assigned identities, or even criticizing these identities is usually punished, stigmatized and discriminated against in our societies.


The punishment, stigmatization and discrimination one must bear in the process of refusing an identity inevitably supply a political consciousness to the refuser. Why should I step outside, conventional norms of masculinity, ethnicity and caste (and face the punishment, stigmatization and discrimination)? Why can I not bring a constructive criticism about an identity while keeping myself within the identity? Perhaps, even when I refuse the ethnic identity, I might be still unable to abandon myself from the framework of ethnic identity completely. I might be still attempting to reframe the identity.

I don’t mean to say that I have completely abandoned my ethnic identity, but this issue came to light upon reception of a Facebook post I published denouncing my Sinhalese ethnic identity.

The post said: “I am not a Sinhalese. I don’t have an ethnicity. I am more proud calling myself an outcast than calling myself Sinhalese. Below is a quote from an article I wrote in 2014 (Teaching Racism through School Curriculum, My ‘Ala’ Story, Grade Six Story, Parrot Story and Gnanasara Story): 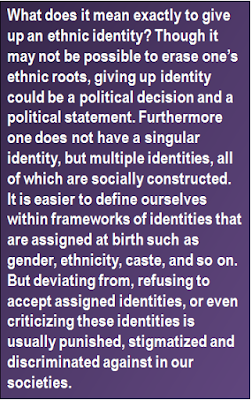 ‘The second argument is as follows: I am Sinhalese because I speak and write the Sinhala language. I have problems with this argument as well. I have two friends. One’s father is Tamil. The other’s father is Muslim. Their fathers have died. The first friend has a Tamil surname and Sinhala name, and he grew up with his Sinhala mother and her relatives. The latter’s surname and name are both Muslim and he also grew up with his Sinhala mother and her relatives. Though they don’t know a word of Tamil, my friends are identified as Tamil and Muslim, respectively, on their birth certificates. Sinhala-ness is neither related to our lineage, nor does it relate to our language. It is only tradition. Even being Tamil and Muslim is solely tradition.’”

The first comment I received for this Facebook post was from a young man who stated “You, outcast ponna kæriyā. You better eat shit than [write] this.” Kæriyā is a word considered obscene and insulting. However, it is also used in the sense of ‘thug’ with connotations of masculinity. Literally kæri means ‘seminal fluid’. The second comment, from the same person, was a picture of shit with text stating “Here, eat!”

Before I could respond, one of my friends did: “When you say ponna kæriyā, isn’t it paradoxical? Then tell me whether you have tasted shit.” The paradox was evident as ponna connoted a meaning of emasculation while the term kæriyā connoted a meaning of masculinity and power . . . While I was glad to see my friend note this paradox, I was interested in the rhetoric of the violent response my post had evoked from the first respondent.

I first noted his use of the term Ponnayā, a derogatory term for feminine men and homosexuals in general, often used in the context of hate speech. Reading into his use of the word, one may wonder if Ponnayās can become Kæriyās? Are Ponnayās the ones who criticize religion and ethnicity? Are there Sinhala Ponnayās? Are there Buddhist Ponnayās? This is not the first time that I have been called Ponnayā by racists . . . Why do I become ponna? What will be taken away from me when I am ponna? Do I become ponna when I leave my Sinhala identity? Can I continue being Ponnayā while keeping my Buddhist identity? Does it mean my sexuality, when the term Ponnayā is stated?

In the middle of the conversation, the young man who called me “outcast ponna kæriyā” in the first comment left the conversation after blocking me from his profile. Soon after, a second person joined the conversation and elaborated the notion of being outcast by relating it to ‘illegitimate birth’. “Don’t you doubt who made you born to your mother – whether it was your father or a dog or a mule?” I answered him with “No. I don’t have such a doubt. Because I believe that human beings can’t make children by having sex with a dog or a mule. But I don’t think I should obstruct your imagination of possibility to have a human child born out of a lion-human relationship.”

According to Mahavamsa epic story, the Sinhala nation was born from a sexual relationship between a woman and a lion. In the Facebook conversation with the second person, the lion symbolized a respected animal and a ‘legitimate birth’, while the dog was used a as a symbol of inferiority and an ‘illegitimate birth’. Paradoxically the lion lives away from us in a foreign country, in a forest, while the dog lives amongst us. Does our understanding of so called culture refers to things which are foreign and outside of our lives? 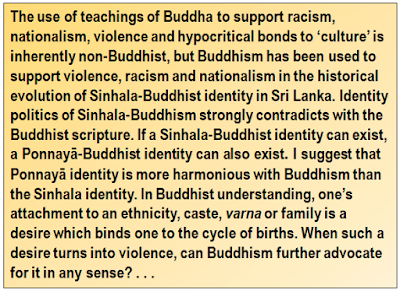 I did not become angry with their (the Facebook respondents’) insulting words against my arguments. Not getting angry could be a ponna characteristic. Perhaps those who are not ponna become angry. The macho guys declare wars, start fights. Peace could be a ponna characteristic. I understood that my critics placed their ethnicity on the ground of Buddhism, so I responded with a story from the Buddhist texts (Akkosa Sutta: Discourse on Insult, Brahmana Sanyutta, Sanyuktta Nikaya translated from Pali by Thanissaro Bhikkhu, 1999):

“The Blessed One was staying near Rajagaha in the Bamboo Grove, the Squirrels' Sanctuary. Then the Brahman Akkosaka Bharadvaja heard that a Brahman of the Bharadvaja clan had gone forth from the home life into homelessness in the presence of the Blessed One. Angered and displeased, he went to the Blessed One and, on arrival, insulted and cursed him with rude, harsh words. When this was said, the Blessed One said to him: ‘What do you think, Brahman: Do friends and colleagues, relatives and kinsmen come to you as guests?’

‘Yes, Master Gotama, sometimes friends and colleagues, relatives and kinsmen come to me as guests.’

‘And what do you think: Do you serve them with staple and non-staple foods and delicacies?’

‘Yes, sometimes I serve them with staple and non-staple foods and delicacies.’

‘And if they don't accept them, to whom do those foods belong?’

‘If they don't accept them, Master Gotama, those foods are all mine.’

This comment adds a different dimension to my Ponnayā identity . . . In his response, the second person on Facebook accused me of being a ‘radical’, and that I had studied in an art faculty in a university. Does my Ponnayā identity go together with radicalness and art? I am not the only one who was recently recognized as “radical Ponnayā”. Filmmaker Chinthana Dharmadasa who questioned the Buddhist identity of the ancient ‘Buddhist’ King Dutugemunu in a TV programme was also blamed as ‘radical Ponnayā’ on social media.

This further complicates the meaning of the term Ponnayā. It is not simply a term related to gender or sexuality. A Ponnayā criticizes the beliefs of the majority. We should not abandon the term Ponnayā by simply rejecting it as a violent word. The Ponnayā identity should be embraced proudly. 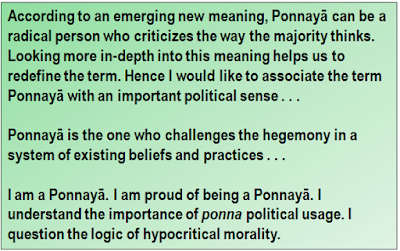 Ponnayā – an identity to be embraced

In general there is an acceptance that the term Ponnayā is a derogatory term used in relation to a person with same-sex feelings, or a feminine man. It is also used in the context of a person with ‘weak or pusillanimous characteristics’. However, an additional meaning is now emerging to the term Ponnayā based on its use in the context of hate speech on social media platforms such as Facebook. According to this emerging new meaning, Ponnayā can be a radical person who criticizes the way the majority thinks. Looking more in-depth into this meaning helps us to redefine the term. Hence I would like to associate the term Ponnayā with an important political sense.

I am a Ponnayā. I am proud of being a Ponnayā. I understand the importance of ponna political usage. I question the logic of hypocritical morality. I understand when replying to Sinhala-Buddhist nationalists, the use of Buddhism helps to problematize their ego consciousness. Is Buddhism a knowledge base or a religious identity which could be used only by Sinhala nationalism, masculinity and heteronormativity?

The use of teachings of Buddha to support racism, nationalism, violence and hypocritical bonds to ‘culture’ is inherently non-Buddhist, but Buddhism has been used to support violence, racism and nationalism in the historical evolution of Sinhala-Buddhist identity in Sri Lanka. Identity politics of Sinhala-Buddhism strongly contradicts with the Buddhist scripture. If a Sinhala-Buddhist identity can exist, a Ponnayā-Buddhist identity can also exist. I suggest that Ponnayā identity is more harmonious with Buddhism than the Sinhala identity. In Buddhist understanding, one’s attachment to an ethnicity, caste, varna or family is a desire which binds one to the cycle of births. When such a desire turns into violence, can Buddhism further advocate for it in any sense?

Note: Buddhists are a minority in Sri Lanka though the census statistics may identify the Buddhists as the ‘majority’. No one can be born into Buddhism. Being born into Buddhism is a product of a colonial understanding of religion. Ponnayās, too, are a minority in this country. Nobody can become a Ponnayā by birth. To become a Ponnayā, one must have the courage to challenge the hegemony.

Damith Chandimal is a human rights defender, queer activist, writer and social researcher based in Colombo, Sri Lanka. He works as a consultant to the INFORM Human Rights Documentation Centre on the protection of human rights defenders and documenting human rights violations. He is also a student in the Master's Programme in Gender and Women’s Studies at the University of Colombo.
Posted by Varta at 22:56