When the mind disassembles

My Story, Mar '16
Dementia is the focus of Pallav Bonerjee’s next in a series of personal narratives on psychology, people and destiny

Many of you will have encountered this nebulous term called ‘dementia’. Unfortunately, it is becoming a rather familiar term these days. Dementia is a collection of symptoms essentially as a result of a chronic degenerative disease of the brain. These symptoms can include disturbances in memory (short-term memory), orientation and comprehension, calculation, learning capacity, language, thinking and judgement. There is currently a great deal of academic and clinical interest (both national and international) in trying to find a cure for this disorder, which mostly affects the elderly (typically, post 65 years of age).

The most common cause of dementia is Alzheimer’s disease, which was first discovered in 1906. Since then we have had over a 100 years to identify a cure and we haven’t been able to reach there yet. Just to give you a picture of the magnitude of its impact, currently around 35 lakh people in India have Alzheimer’s dementia. It is estimated that this number will double in the next 15 years. According to the February 2016 issue of TIME Magazine, “Globally, nearly 50 million people are living with dementia, most of which is caused by Alzheimer’s and in the absence of effective drugs and other interventions, this number is expected to double every 20 years”. Now, that is not a pretty picture.


To add to the complexity of this condition, we now know that it is an irreversible condition (once diagnosed, we simply can’t help a person out of it). All medicines available today can at best slow down the process of degeneration but not stop it. Which is why, it becomes so important to recognise and detect the symptoms of this disease early on. One also has to become familiar with the potential risk factors that may pre-dispose a person to develop this condition, like a family history of Alzheimer’s dementia. Other risk factors could include obesity, smoking, high blood pressure and diabetes, all of which should be controlled between the ages of 40 and 50 years rather than wait for the onset of the illness. Timely and accurate diagnosis not only helps doctors manage the symptoms better, but also slows down the decline of memory and other cognitive impairments.

A person suffering from dementia (Alzheimer’s type) will find it progressively difficult to carry out their day-to-day activities like brushing, bathing, combing, dressing, eating, taking care of personal hygiene and using the toilet. They will become more dependent on caregivers and family members. Sadly, in the absence of any previous experience, care giving ends up becoming a real challenge for the family as well.

Interestingly, most memory loss in Alzheimer’s dementia in the initial phase concerns newly learned information or short-term memory loss. This means the sufferer may not be able to remember what they had for breakfast later the very same day, or remember people who visited them or called on phone the day before, or for that matter, give a correct account of a programme that they just saw on TV a while ago. Frequently, to fill in these gaps in their memories, they create new events and situations (technically known as confabulations) in their minds to achieve a sense of closure while trying to remember. Surprisingly, even while their short-term memory starts getting fuzzy, they will accurately recollect in great detail most information from their long-term memory store (for example, events from childhood and school, names of friends and neighbours, happenings in their jobs, and dates of significance in their lives).

As the disease progresses through the different stages, more and more everyday functions start getting compromised in the individual. Language processing is usually next after short- term memory loss. When this happens, it becomes exceedingly difficult for the person to find the right words to communicate adequately and name common objects around them. This usually turns out to be a frustrating experience for both the individual suffering from dementia as well as the family members who have to constantly guess the right words. 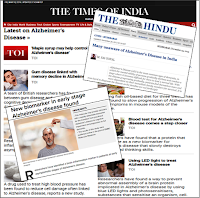 After this, the disease targets an individual’s ability to understand concepts, make plans and solve problems on a daily basis. This takes away the independence and individuality of the person as they now have to rely on family members and caregivers for the most basic of their decision making processes. The next victim of this illness is usually the faculty of emotional regulation. People with difficulties in this crucial internal mechanism are erratic, impulsive, edgy, irritable and unpredictable with respect to displaying their emotions. They may get terribly angry without provocation or may feel absolutely devastated and hopeless. These mood swings are a major challenge at home and are most often the reason for admission in geriatric wards in hospitals all over the world.

In its final stages, the disease makes a person forget their own family members. This could also be accompanied by false perceptions (hearing things in the absence of any noise or seeing things in the absence of anyone around). Eventually, it damages the parts of the brain responsible for breathing, resulting in the death of the person. Typically, this progression from one stage to another and eventual fatality can last anywhere between 8-10 years after the onset of the illness.

Having said this, are we then to just sit tight and pray to god that this curse of an illness doesn’t happen to us, or to anyone that we have ever come in contact with? Or is it possible for us to do some things to try and prevent it or push it back to the extent possible? Thankfully, the second option is correct as more and more research seems to suggest today.

Making consistently healthy lifestyle choices and modifications during our young adulthood years seem to hold a vital key to modify the chances of our falling prey to this condition during our later years. Moreover, even as an elderly free from any of the challenges mentioned earlier, one may opt to age actively as against depriving oneself adequate stimulation (both physical and mental).

There are many studies that strongly support the hypothesis that solving crossword puzzles, assembling jigsaw puzzles and playing Sudoku on a regular basis help delay the onset of accelerated memory decline in most adults. The good news is that one need not necessarily depend on such complex cognitive challenges all the time. Apparently, even simple activities like regular newspaper reading, mental calculations, listening to music or playing a musical instrument, gardening, cooking, learning a new language (over and above one’s mother tongue), visiting new places, playing a sport and socialising regularly (making new friends) also help a great deal in achieving the same objective. 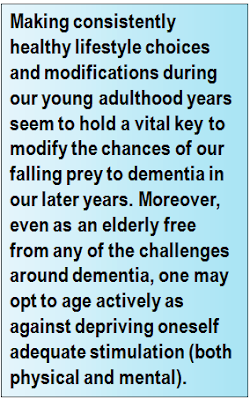 One reason to explain this is the fact that the brain is usually better stimulated when one is trying to perform a novel task. Thus, engaging in something new on a regular basis apparently safeguards the brain from the onslaught of degenerative conditions like dementia. Such activities also serve an additional function of de-stressing the individual and have an overall calming effect on them.

Aerobic exercises have also been proved to work wonders for most elderly in helping them combat mental fatigue and slowdown. What it does is push more oxygen to multiple brain regions, thereby facilitating speed of information processing at its most basic level.

Dietary and nutritional changes also become necessary to stall dementia from advancing. What, how much and when we eat become progressively important questions to ask as we age. Foods rich in anti-oxidants (fruits and vegetables) are a must. Saturated fat (ghee and butter) and deep fried products need to be avoided. Try foods rich in omega-3 fatty acids (these are present in fish). Raise your good cholesterol (HDL) by exercising regularly and decreasing body weight. Finally, if you must drink alcohol, choose red wine and drink conservatively (one glass a day).

It is also important to get regular health check-ups done, ideally once in six months, just to be aware of one’s health status and address any deficiency or excess right away. In the same way, it is also important to get a brief evaluation done on aspects of one’s cognition as one crosses the age of 60. These tests will check cognitive parameters like attention, concentration, memory, problem solving, language, calculation and learning ability. Most of these tests are paper-pencil based evaluations and non-invasive in nature. They are carried out by trained professionals who compare the test results to matched control groups and make inferences on the report and explain the results.

Just as it is important to recognise the symptoms of dementia early and start interventions quickly, one should also not self-diagnose occasional forgetfulness as inevitable symptoms of dementia and cause panic. It is always safer to get a proper evaluation done and then respond to it appropriately. As a senior neuro-psychiatrist once remarked of dementia, “Forewarned, is forearmed!”

Readers who want to know more about Alzheimer’s dementia and its care are welcome to send in their queries to vartablog@gmail.com. We will respond to the queries in consultation with the author of this article and other mental health professionals – Editor.

Pallav Bonerjee is Consultant Clinical Psychologist at VIMHANS Hospital, New Delhi. Whenever stressed, he never fails to spend some time with his own therapist, who has a wet, black nose and goes by the name of Copper!
Posted by Varta at 22:35