Kolkata, February 20, 2016: Nearly 30% out of 71 people felt that the age of sexual consent in India should be 15 years. Almost 25% agreed that long-term intimate partners need not explicitly seek verbal consent every time they wanted to have sex with each other, another 30% were undecided. Among those who clearly disagreed with this statement, there were far more women than men. Not saying no or not resisting advances implies consent for sex – only 54% of the audience disagreed with this statement. Consent for sex can be withdrawn at any point of time – 79% agreed, but 21% did not or were undecided, which was equally worrying!

These and more statistics emerged from a panel discussion ‘Whoever Voluntarily... Decoding Consent’ organized by NGOs Civilian Welfare Foundation, Kinky Collective and Varta Trust at the Academy of Fine Arts on February 20, 2016. More than a 100 people attended the event, leaving little space to move around in a conference hall that had space for 90. Of these, 71 responded to a pre-event questionnaire that helped evaluate audience knowledge levels and perceptions around issues of consent, particularly sexual consent.

The responses, albeit drawn from a sample with limitations (most people in the audience were residents of Kolkata and its neighbourhood, and most had learnt about the event through Facebook), pretty much reflected what the panellists had to say about the ‘greyness’ of consent, and the urgent need for widespread and continuing dialogue on the issue.

The panel included women’s rights activist Anuradha Kapoor (also Director, Swayam – Ending Violence Against Women), psychiatrist Dr. Aniruddha Deb, advocate Kaushik Gupta (also a part of Kinky Collective and Trustee with Varta Trust) and queer activist Pawan Dhall (Founding Trustee, Varta Trust). After Suchandra Ganguly of Civilian Welfare Foundation presented the welcome note, clips of songs and scenes from Hindi films were screened. Each clip portrayed how blatantly presumption and violation of consent were passed off as harmless pranks and romance in Bollywood. The last video was an animation (Tea Consent) that drew an effective analogy between consent and preference for tea as a drink. This set the perfect opening for the panel discussion with the question “What is consent?” 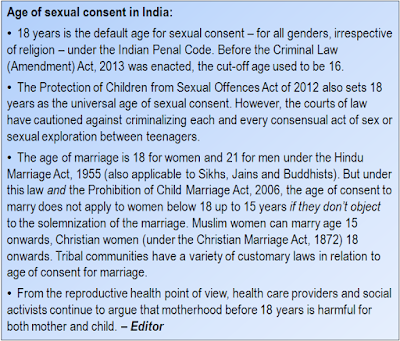 The panellists were invited by moderator Sayan Bhattacharya to speak about different facets of consent. A dictionary would probably explain consent as ‘permission for something to happen or agreement to do something’. But Anuradha Kapoor said defining consent was a difficult task because of the innumerable layers to it. Any definition of consent must capture who the consent seeker was and who the giver, and then also to what it was that consent was sought for. This would inevitably point at power dynamics within relationships influenced by patriarchy and heteronormativity. These factors determined who had the power to say yes or no. For instance, in marriage, the wife’s consent was often taken for granted, and not only in the sexual context. Sometimes something as seemingly small as whether to wear a bindi or not while going out would be decided by the husband!

Pawan Dhall remarked that it was easier to define what consent was not. Like buying a local train ticket for every journey, you should ask for it each time, and so consent should not be mistaken for a monthly train ticket that would allow you to hop on without queuing up at the ticket counter. Kaushik Gupta, on the other hand, provided the legal definition of consent under the Indian Contract Act, 1872:

“Section 13: Two or more persons are said to be consented when they agree upon the same thing in the same sense (consensus-ad-idem).

“Section 14: Consent is said to be free when it is not caused by coercion or undue influence or fraud or misrepresentation or mistake.”

The advocate observed that what the law didn’t specify was the right to withdraw consent, especially in the context of marriage. He argued that the right to say yes must also lead to the right to say no! Clearly, even the law was not entirely ‘black and white’ with regard to consent.

The discussion moved on to ‘shades of consent’. Pawan Dhall shared key findings from recent qualitative research studies he was part of. These studies focussed on violence experienced by queer people, in particular men who have sex with men (MSM) and trans women in India and other parts of South Asia, and how the violence impacted their health. It was seen that there were diverse contexts in which sexual consent was given to male sexual partners, especially consent for unprotected sex, often with multiple partners and at the risk of STI and HIV exposure.

While the consent could be based on free choice and motivated by love, romance or sexual attraction, it could also be motivated by financial compulsions. Many respondents to the studies shared that they consented to paid sex so that they could earn a living or maintain their partners and families. This was true of many queer individuals who, thanks to strong social stigma and discrimination, suffered loss of education and livelihood opportunities.

Yet other respondents spoke about peer pressure to live up to gender and sexual norms, or when sex seemed to offer an escape from incessant violence committed by homophobic or transphobic family members. In countries or regions where men in uniform (collective term for the armed and police forces) wielded considerable power, there were those who agreed to have sex with them to avoid arbitrary arrests and violence. The speaker felt that in these circumstances the key concern for policy makers, law enforcers and health workers should not be just the provision of consent but the ‘quality’ of consent provided.

As the discussion progressed, audience questions and their answers treaded more and more difficult terrain. For example, did women have space to ask for sex, when the terms were decided by men regarding when, where and even what kind of sex to have? Anuradha Kapoor reflected that different people had different notions of consent, and this was based on their upbringing. 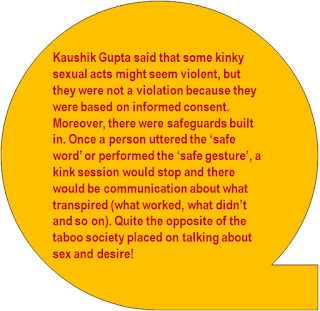 Kaushik Gupta upped the ante when he spoke about how the kink community treated sexual consent. Kink practitioners always started with consent, and a lot of emphasis was put on the process and experience of negotiating consent. A fair negotiation could take place only when all people involved were on a level platform in terms of possibility of finding play partners, skills of negotiation, and level of information available regarding the consequences of what was being negotiated for.

At the beginning as well as during the negotiation, a proactive exchange of information took place from the more experienced to the less experienced. This created a space held with respect and exploration. Within this space, sex was never presumed irrespective of the nature of relationship between the kinksters involved.

He further elaborated that some kinky sexual acts might seem violent, but they were not a violation because they were based on informed consent. Moreover, there were safeguards built in. Once a person uttered the ‘safe word’ or performed the ‘safe gesture’, a kink session would stop and there would be communication about what transpired (what worked, what didn’t and so on). Quite the opposite of the taboo society placed on talking about sex and desire!

Dr. Aniruddha Deb led the audience into the world of fantasy. He wondered if we needed permission from the ‘object’ of our fantasy in order to fantasize about them. Different people dealt with their fantasies differently – some chose to live the fantasy in their imagination, while others carried out the fantasy within the boundaries of reality.

He raised further provocative questions through narrations of his professional experience: Was consent derived through seduction free or coerced? What could be the language of letting one’s sexual partner know that we were uncomfortable with something? Would it have to be verbal communication or something to be inferred by the partner by observing our body language?

Mental health activist Ratnaboli Ray from the audience questioned to what extent consent was emotional and to what extent cognitive. Dr. Aniruddha Deb replied that consent was equally emotional and cognitive. Without either element, it might not be free. “If my consent is divorced from emotion, it’s incomplete, and may lead to regret,” he clarified. 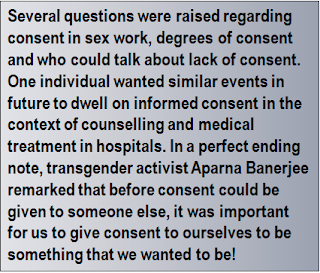 Several questions were raised regarding consent in sex work, degrees of consent and who could talk about lack of consent. One individual wanted similar events in future to dwell on informed consent in the context of counselling and medical treatment in hospitals. In a perfect ending note, transgender activist Aparna Banerjee remarked that before consent could be given to someone else, it was important for us to give consent to ourselves to be something that we wanted to be!

We live in the land of “mounam sammati lakshanam” (an adage that says silence is indicative of consent), and the predominant culture globally is one of normalization of sexual violence because of attitudes around gender and sexuality. The understanding of consent is further twisted and the line between consent and non-consent blurred by popular films, music and other media. But slowly and surely a revolution is in the making – that of nurturing a ‘consent culture’ rather than a ‘rape culture’; a more respectful social scenario where asking for consent is normalized and where consent is not a matter of presumptions, ego or hesitation.

The range of issues around consent may be mindboggling – marital rape, flirting, violence versus violation in the context of kink, consent in non-sexual contexts like medical treatment – but a start has been made. This panel discussion is a small contribution towards generating a culture of transparency, and the organizers have plans to go deeper into the issues involved through a series of similar events with different audiences in 2016.

Pompi Banerjee is a psychologist and works with an NGO for their health rights programme. She identifies as queer, gender fluid and kinky, and is a member of Kinky Collective. On her holidays she’s either glued to books or out and about – organizing or taking part in events on gender and sexuality rights.