Happenings, May '16
Shampa Sengupta reports on a consultation titled ‘From Handicapped to Divyang: Politics of Identity’ held at Jadavpur University, Kolkata earlier this year

Kolkata, March 16, 2016: In December last year, in a radio show named Mann Ki Baat, Prime Minister Narendra Modi referred to persons with disabilities as ‘divyang’ (divine body). This generated much debate in the country, and in light of this, the School of Media, Communication and Culture, Jadavpur University and Sruti Disability Rights Centre teamed up today to organize a consultation on the ‘politics of naming’ persons with disabilities.


A number of disability rights activists (including the author of this article) and researchers engaged with the concerns of persons with disabilities participated in the consultation held at Jadavpur University. The author began the discussion by introducing the problem at hand – the assignment of different and often disrespectful nomenclature to persons with disabilities. She pointed out: “Many apex bodies like the National Institute for the Orthopaedically Handicapped and National Institute for the Visually Handicapped use the term ‘handicapped’ in their very names, a term that has been much criticized!”

Now, the term divyang is slowly coming into vogue. Even the national media is using the term without critical thinking, though not so much in West Bengal. Yet, the state government used the term while laying down its annual budget this year, as was the case with the Railway Budget of India, 2016. The author elaborated that one problem with this term was that it did not specify which kind of disabilities it referred to. This was similar to the confusion created by the West Bengal government when it launched the Kanyashree programme in 2013. The programme mentioned coverage of girls with physical disabilities, but did not specify which physical disabilities. A reply is awaited to a letter sent to the concerned department demanding an explanation. 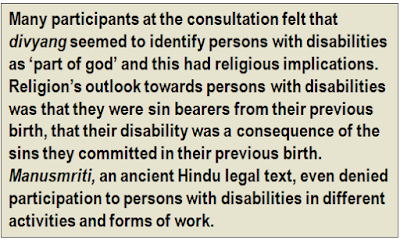 Bubai Bag, who has completed a PhD on the disability rights movement in West Bengal, said it was language that often created discrimination and divisions. He said that terminologies related to disability were not always used responsibly and that language in relation to disability differed in urban and rural areas. While in the urban space disability was often assigned broad nomenclature like ‘differently abled’ or ‘persons with disabilities’, in rural areas the naming was more direct and distinctive. Visually impaired people were called kana and the deaf kala. Mute individuals were called boba, individuals with disabilities in their legs were called khora or lula. 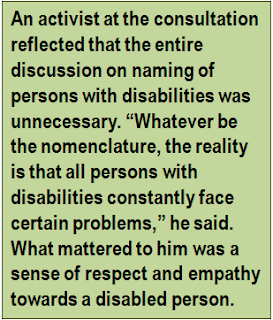 Discussing the history of the disability rights movement in India, he said that after Independence persons with disabilities were grouped with the Scheduled Castes and Scheduled Tribes. It was former Prime Minister Indira Gandhi who first used the expression ‘disabled person’ and later in 1995, the same nomenclature was used in the Persons with Disabilities (Equal Opportunities, Protection of Rights and Full Participation) Act. He argued that an element of sympathy lurked behind terms like differently abled, but it was a positive attitude towards persons with disabilities that would be far more effective in helping them overcome their disabilities.

After the initial presentations, a discussion session followed. Activist Jeeja Ghosh said the expression ‘challenged’ was a baseless one. She agreed with Anibran Mukherjee on the political implications of the term divyang, which reflected a tendency to elevate persons with disabilities to the level of gods, while doing little for them in terms of securing their rights. Similarly, Swati from the Indian Institute of Cerebral Palsy (IICP) felt divyang seemed to be a way of ‘appeasing’ a marginalized community.

For Den, who is also associated with IICP, the key issue was one of respect, and he argued: “The right terminology should be adopted and disseminated widely among the masses, including persons with disabilities.” He also made a few unusual recommendations. First, an appropriate term should be decided on and then it should be used in all policies and programmes for the disabled, not just in India but internationally. This would enable smoother exchange of ideas and resources for projects. Second, translation of the term in different languages should be avoided as often the import of the term changed in the process of translation. Finally, it was necessary that persons with disabilities entered the world of ‘mainstream’ politics as this would strengthen the disability rights movement. 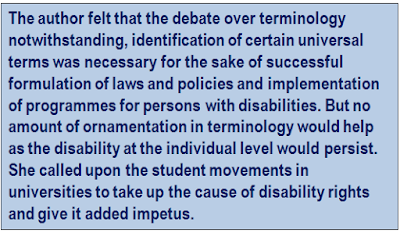 Soumen Upadhyay of NGO Parivaar Bengal said, “There should be a protest against terms like divyang, and all institutes and organisations should unite to make such a movement stronger.” This led the discussion into a different sphere. Prof. Samantak Das said that for institutional work and for the purpose of addressing persons with disabilities there should be freedom in terms of what the community wanted to identify with. But there were barriers to be dealt with at the political level. At the university level, one had to follow the use of terms directed by the University Grants Commission.

Various participants, mostly students from Jadavpur University, at this point talked about the discrimination they faced within the university. Prof. Samantak Das promised to take up these concerns with the university authorities.

The author felt that the debate over terminology notwithstanding, identification of certain universal terms was necessary for the sake of successful formulation of laws and policies and implementation of programmes for persons with disabilities. But no amount of ornamentation in terminology would help as the disability at the individual level would persist. She called upon the student movements in universities to take up the cause of disability rights and give it added impetus.

Prof. Nilanjana Gupta thanked everyone and conveyed on behalf of the School of Media, Communication and Culture that letters would be sent to both central and state government officials on the concerns around nomenclature like divyang. The media too would be sensitized on this issue that was at the core of the disability rights movement.

Shampa Sengupta is a Kolkata-based activist working on gender and disability issues for more than 25 years. She is the founder of an advocacy group called Sruti Disability Rights Centre and is Executive Committee Member, National Platform for Rights of the Disabled.
Posted by Varta at 22:02