Pehchān, an ambitious civil society-government partnership to provide sexual and reproductive health, HIV, legal aid and social security services to nearly 4,50,000 sexual and gender minority people in India, has drawn to a close. Its scale and implementation attracted both praise and criticism, but the completion of its term will leave behind a vacuum feel Anupam Hazra and Souvik Ghosh of SAATHII, a national NGO that implemented the programme in eastern India

Kolkata, May 2016: Even as we write this, West Bengal is counting votes cast for a Legislative Assembly election, and by the end of this month a ‘new’ state government may well be in place. But what will be new about it from the public health perspective? Will the five-year cycle of polls yield fresh hope for some of the most marginalized communities like transgender women, Hijras and men who have sex with men (MSM)? Barring one or two political parties, none seem to have included their socio-economic and associated concerns in the election manifestos. One party fielded two transgender women as candidates from prominent seats in Kolkata, but how respectful was such inclusion is open to debate (the candidates withdrew from the contest in protest against what they felt was tokenism and a publicity stunt).


Just about two years ago, the Honourable Supreme Court of India gave a landmark judgment on transgender identities and rights. In line with that judgment, West Bengal now has a development board for transgender communities, one of the few of its kind in India. But other than the efforts of this body and individual community groups or networks, there seems to be no new government policy or programmatic hope to ensure that sexual minorities in West Bengal will be able to lead healthier and more dignified lives as a matter of human rights. In this context, the completion of Pehchān’s term bears significance.

Started in 2010, the programme was funded by Global Fund to Fight AIDS, Tuberculosis and Malaria and lead nationally by India HIV/AIDS Alliance. Attempting to build the leadership and service-provision capacity of around 200 community-based organizations (CBOs) spread across 18 states, the five-year programme complemented the National AIDS Control Programme. Solidarity and Action Against The HIV Infection in India (SAATHII), one among six regional partners, lead the implementation in West Bengal, Odisha, Manipur and Jharkhand in partnership with 38 district-level CBOs and the health departments of the respective state governments and district administrations. 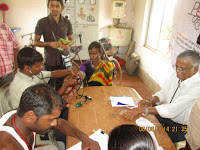 In West Bengal, the programme reached out to more than 23,000 MSM, Hijra and other transgender women with a range of health, legal aid and social security services in places across the length and breadth of the state where previous government programmes could not – in particular, northern districts like Alipurduar, Dakshin Dinajpur, Malda and Uttar Dinajpur. Tourist spots like Digha, pilgrimage centres like Tarapith and areas around Visva-Bharati University in Santiniketan were other places where the programme helped extend the provision of HIV and related services to MSM, Hijras and other transgender women.

The successes in geographical coverage should be seen with the perspective that the communities served by Pehchān are among the most stigmatized and discriminated against in society, and therefore extremely difficult to mobilize. These achievements were in large measure because of Pehchān’s emphasis on the formation and strengthening of CBOs, which built contact with the programme clients through outreach, drop-in centre and counselling services. For instance, Dinajpur Notun Aalo Society in Uttar Dinajpur district facilitated HIV testing for 53% of its 1,554 clients, a commendable rate for an organization that came into being only in the last few years. An outreach staff member from the same agency rose through the ranks, trained to become a counsellor and now works at a government HIV testing and counselling centre.

Mass awareness and sensitization was another area where the CBO partners took big strides. Amitie’ Trust, which worked in Hooghly and Howrah districts, brought Chandannagar town onto India’s rainbow pride walk map – last year’s walk on June 26 was the third such walk in the erstwhile French colony. Gokhale Road Bandhan and its partners in the Association of Transgender and Hijra in Bengal generated mass interest and support for transgender issues through queer-themed events like the annual Transgender Day celebrations in April.

The programme also enabled the CBOs to mobilize financial and other resources. While Amitie’ Trust raised funds from corporate bodies, Astitva Dakshin in Purba Medinipur built links with industrial bodies, which aided them in accessing space to organize health camps. Similarly, Dinajpur Notun Aalo Society expanded its ambit by receiving funds from the district administration to implement a Rogi Kalyan Samiti project and set up a shelter home for the aged. Transgender women will be employed as service providers in both projects but the service recipients need not be restricted to the transgender communities.

Interestingly, one achievement of the programme was to enable transgender women acquire voter identity cards in their desired genders. So, one hopes that many transgender women exercised their right to vote in the recent polls and more and more will in future polls. But when will these votes transfer into policies and long-term programmes that are inclusive of the gender and sexuality diversity prevalent in our society?

Perhaps more programmes like Pehchān are needed – programmes that enable communities to engage both government and non-government stakeholders, and push for greater inclusion in the education, livelihood, health, legal, social security and other spheres; definitely programmes that last longer than five years to make a stronger and lasting impact.

Pehchān’s completion doesn’t mean completion of the larger objectives the programme served. In fact, its closure at this stage seems to raise the question “But there is so much more to do and so, what next?” Community groups, funding bodies, political parties, government agencies – all of us should be looking for answers.


Anupam Hazra and Souvik Ghosh are colleagues in the Kolkata office of SAATHII. The authors would like to thank all individual and organizational stakeholders involved in planning, funding, guiding and implementing Project Pehchān.