Kolkata, September 8, 2013: ‘Aathmika – Born of Soul’, a six days long exhibition of paintings by audio-visual journalist Amitabha Sengupta, concluded at the G. C. Laha Centenary Fine Arts Gallery yesterday. Part tribute to womanhood, part expression of a long cherished desire to take up fashion and other arts, the painting exhibition was a debut effort by the artist and was inaugurated on September 2 by Odissi exponent and social activist Alokananda Roy. The paintings were also available for purchase. 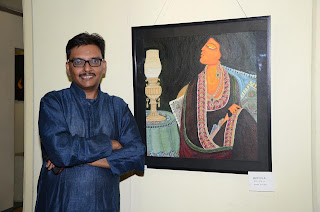 There was a sense of intimate knowledge regarding the women portrayed in the 21 odd paintings, almost like a personification of the different moods of the artist. The paintings, rendered in mixed media, detailed costumes and accessories from different parts of India and had the charm of a bygone era. The influence of Madhubani and other folk art forms was also visible. While the lines and forms were well defined and the colours vibrant, some of the compositions were weak. The flat backgrounds also needed a little more attention.

The artworks that stood out were Veenapani, Draupadi, Ramola and The Harem. In the artist’s words, who took a sabbatical from his journalistic pursuits in 2012 to work on the paintings and plans to continue his passion, “The artworks maybe seen as a tribute to womanhood, but truly speaking, I found that the female form can express the range of human emotions the best.” One hopes that the world at large imbibes similar sentiments from the world of art and displays greater respect for women and girls.

Pawan Dhall aspires to be a rainbow journalist and believes in taking a stand, even if it’s on the fence – the view is better from there!
Posted by Varta at 23:11