My Story, Sep '13
By Sukhdeep Singh

Incidentally, our names are also reflective of all of our socially conditioned identities in most cases. A name can instantly reveal many facets of our socially constructed identities, like religion, gender and nationality. But the most segregated of these clearly remains the gender of names. Across various religions, nations, regions – names of the male and female genders are clearly demarcated and can rarely transgress. Thus, our gender identity starts getting constructed from early childhood, when a baby is named. 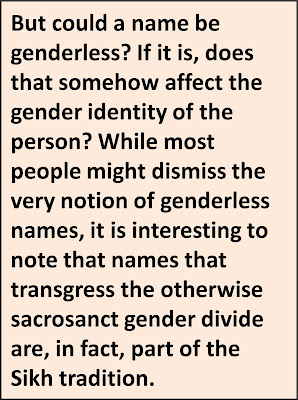 But could a name be genderless? If it is, does that somehow affect the gender identity of the person? While most people might dismiss the very notion of genderless names, it is interesting to note that names that transgress the otherwise sacrosanct gender divide are, in fact, part of the Sikh tradition. Growing up as a Sikh boy in West Bengal has enriched me with many experiences, but the one that I remember from early childhood is the utter confusion that people around me would have with Sikh names. The one question that would be asked again and again, with startled expressions, was: “Do both boys and girls have the same names among Sikhs? How can you then make out who is a boy and who a girl when you hear a name?”

My mother would never tire telling people that if the title was ‘Singh’ it meant the person was male, and if it was ‘Kaur’ the person was female. Yet, people found (and still do) it amusing that Sukhdeep could be the name for either a girl or a boy, with only the surname (Singh or Kaur) designating the gender of the person bearing that name. Getting the name right in the voter identity card (and for that matter even the passport) was another big task, where the authorities would again be confused as to why the wife did not carry her husband’s title. Why would the wife of Dildar Singh be Balbir Kaur, rather than Balbir Singh? Well, simply because the wife would then have to be a man as well – but then, that was difficult for non-Sikhs to understand.

Both, genderless names and a separate (and uniform) title for men and women hold great significance. Sikhism was founded on the ideas of equality, where things like caste and gender discrimination did not matter. So a singular and uniform title (Singh for men and Kaur for women) did away with the caste titles that were prevalent during the founding days of the religion in the medieval period, which was characterised by caste-based discrimination.

Similarly, genderless names hold significance as they essentially do away with the notion that men / women are not equal. If both the genders are equal, they can have the same first names too! While scholars and activists debate the extent to which gender discrimination has lessened, if at all, in our country, there isn’t much difference of opinion around its prevalence in medieval India. So it is noteworthy that one common surname for all women simultaneously eradicates the need for women to change their surnames post-marriage – no adoption of the husband’s surname; Balbir Kaur remains Balbir Kaur throughout her life, irrespective of her marital status. 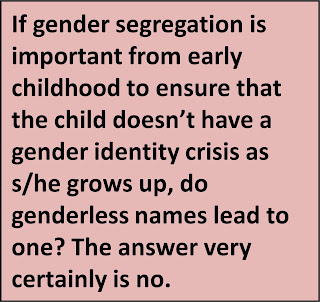 Gender stereotypes have also propagated long hair for women and shorter hair for men. Here again, Kesh (hair) forms one of the five K’s Sikhs are supposed to keep – Kirpan (a short sword), Kangha (wooden comb that holds the hair), Karha (iron bangle) and Kachera (an undergarment) being the other four. This has meant that Sikh men have long flowing hair. Growing up, I would often be teased by other kids whenever I shampooed my hair. They would ask me, “Are you a girl? Then why do you keep long hair?” This is an experience shared by many other Sikh boys; yet, there is no confusion regarding the gender.

Clearly, in a world full of gender stereotypes and rigid gender-based role divisions, there are a few lessons that Sikhism could teach. The founding Gurus probably wanted to challenge gender stereotypes and social constructions of gender, just as they wanted to do away with caste-based divisions and discrimination. Sadly though, the predominantly patriarchal gender bias amongst Punjabis is evident by the screwed sex ratio in the state (and neither has the caste system disappeared). Our gender identities, after all, are more than just our names and the physical features we may sport.

Sukhdeep Singh is a Facebook addict who works as a software engineer by day and transforms into a writer at night. He is the founder and editor of Gaylaxy magazine.
Posted by Varta at 01:15